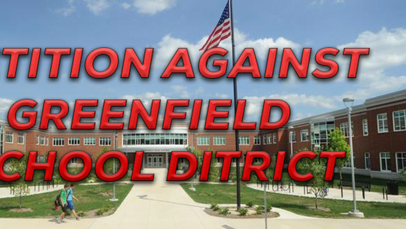 Has the greenfield school district been bullying your kids or someone's kids you know? Well this is the petition for you.

My brother attends the Greenfield Middle School, and has consistently been getting serious punishments for minor mistakes. If that, there not even mistakes there just accidents that everyone and every student does every once in a while. This has happened many time in the recent months. In one class my brother was sitting there and as you know sometimes we zone out. Well he zoned out as im sure we all have before. Just for a minute to look out the window. What a simple "Aye John pay attention please" could fix he got sent to the office and received ISR. Which is there equivalent to ISS (In school suspension) WHAT!? That ridiculous! For literally looking out of the window! How can they do that? Im sure every child in that class looked out the window that day. Another similar story was when he tossed a piece of crumbled paper in the trash can and missed. So what did they do to him? GAVE HIM ISR. I know is frowned upon usually to 'toss' a piece of paper in the can but c'mon. You have got to be kidding me.

And most recently he received detention. What for?... SPILLING A WATER BOTTLE. Yes.. Im serious.. he spilled a water bottle and received detention for it. Like how is that even an option? Get a could paper towels and wipe it up no harm done? Absolutely ridiculous. So are you ready for the kicker? Heres the big one. Okay lets go, SO my mother had had enough of this so she went to the office (not her first time going to ask about the punishments). Anyway she went the school to confront the principle about his/her actions. The principle could not give a reasonable explanation for anything and basically just degraded my brother. Degraded a student to my mother. Thats absolutely should not happen. Ever. It gets better. So while in there my mother apparently slipped one curse world into one of her sentences. I think that reasonable. Especially when your treating her children the way you are. IT happens i'm sure half the other mothers would do the same thing. So after leaving the office she went the the counselor's office and talked to the counselor about some things then decided she would be on her way. As she left the counselor office she was met with a Principle and a Police Officer. THE PRINCIPLE HAD MY MOTHER ARRESTED FOR SAYING A CUSS WORD. Not only that but lying to the the officer telling him that my mother was screaming and raising hell cursing at students in the office etc. ARE YOU KIDDING ME?! I cant believe so many families put there trust in this school and that principle. Anyway she didn't end up getting arrest because the OFFICER SAID this has happened BEFORE and he knows that she didn't do what the principle said. He said he had to arrest a parent a couple weeks before for a similar situation. That is absolutely unacceptable..

Anyway thankfully she wasn't arrested but still was taken to the jaila nd put in the back of a squad car for no reason. There is cameras in the office, they would check to she if she did that. Thats what she told the officer and he believed her.

Thank you for reading if you did read all of this. I know it was long but i needed to explain everything and something needs to be done about this. My brother is not the only one they have done this too. I know other parents where similar things have happened to their children. So i ask you if this has happened to you or someone you know, etc.. Please sign this petition so get this to stop.