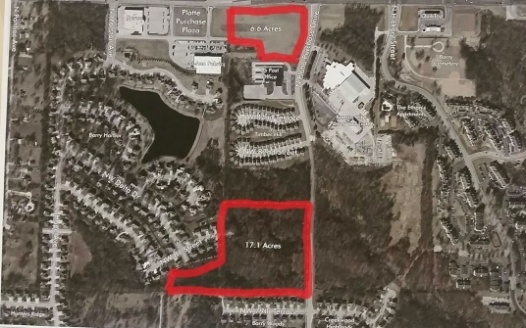 A developer, Brinshore Development, LLC, has proposed the construction of a high-density, subsidized development directly and primarily accessed by North Platte Purchase. This was a grant won by Kansas City to rebuild Chouteu Courts. This development is proposed to include one or both of the currently undeveloped/green space locations:

-UPDATED 7.20.2017 Brinshore is no longer considering the location between NW 79th and 82nd. THE LOCATION AT THE SOUTHWEST CORNER OF BARRY AND PLATTE PURCHASE IS STILL BEING CONSIDERED!

Portions of this development would be managed by the Kansas City Housing Authority for the potential relocation of individuals previously living with the Paseo Gateway Transformation Plan. No representation of the individuals who may be included in the residences was present at the July 5 meeting. City Council members were not present at the meeting.

This area and surrounding neighborhoods is not a suitable place for this development given the current fire, police, school district, and infrastructure needs of the area. It is our belief this development will negatively impact:

- The surrounding school districts of Platte County R-III, Park Hill, and North Kansas City because of the limited resources that are available to children within these schools to date

- Our community and residents as we do not have the resources that are needed for public transportation, retail, healthcare access, grocery stores, and employment opportunities within walking distance

- Traffic on Barry Road and Platte Purchase due to increased residents and construction.

- No considerations have been given for this project’s impacts to city or county tax dollars, police and fire departments support, infrastructure development and maintenance, and existing road access.

Allow this petition to send a resounding and unequivocal message, DO NOT ALLOW the proposed housing in the Platte Purchase and Barry Road and/or Platte purchase areas for the following reasons.

1) It changes the charm and existing characteristics of the existing neighborhood.

2) It sets a precedent for further high-density housing in all other Northland single-family neighborhoods.

3) It will create temporary (construction) and permanent problems to an area not adequately designed for such density increases to school enrollment, police and fire departments support, infrastructure development and maintenance, existing road access, and public transportation.

4) Economic analysis of impacts to city and county resources are either non-existent, unshared by the developer, or inadequate.

We, the undersigned, are concerned citizens urge our city leaders to not proceed with the Brinshore Development Paseo Gateway Housing Project at the North Platte Purchase locations.