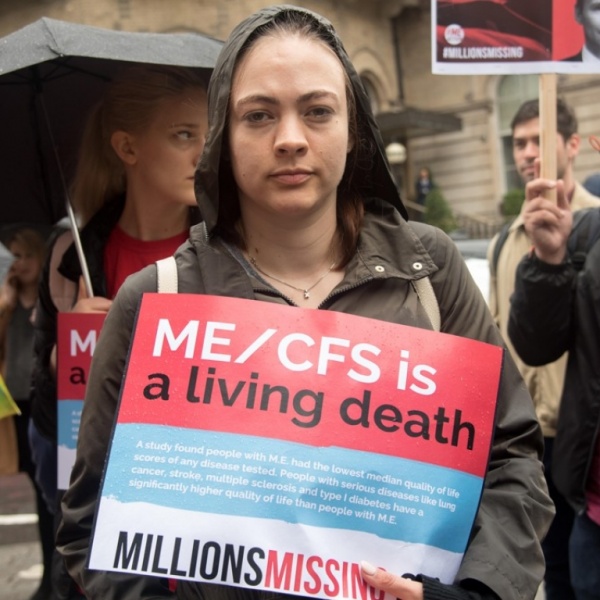 PETITION MAJOR MEDIA OUTLETS TO DO A FEATURE ON ME/CFS

PHOTO: COURTESY OF ME/ACTION MILLION'S MISSING CAMPAIGN. On November 22nd, 2020 60 Minutes anchor Anderson Cooper aired a segment in which he interviewed several different people and physicians who are dealing with or treating Long Covid symptoms - now known in medical circles as Post-Acute Covid-19. Cooper on behalf of 60 Minutes, made no mention of ME/CFS. Similar things have occurred during segments on CNBC, CNN, and others. It is about time that we in the ME/CFS Community finally speak up and let Media outlets know that we are tired of being forgotten and left behind and that it is long overdue for a comprehensive, truthful, and respectful media report to be broadcast nationally on a show like 60 Minutes, Dateline, 20/20, in addition to possible others like the Today Show, Good Morning America, CBS This Morning, Fox and Friends, Nightly News, and Sunday news shows. I have attached a letter I've written for your signature on this petition. I will be sending this petition off to as many news outlets as possible over the coming weeks/months to see if I can garner a response:

To Whom It May Concern (generic title, will be properly addressed when sending out),

60-Minutes aired a November 22nd segment on Post-Acute Covid-19 I found very revealing. First of all - as someone who has personally watched this segment, I want to begin by saying my HEART GOES OUT TO ALL of the people in that segment who are suffering from this unmitigated torture. Having said that, I want to bring the attention of the national and world media to the real story behind the story. That is, that this report by Anderson Cooper, while very informative and heart-rending, has completely and thoroughly ignored an entire group of people in the United States and around the world who are barely surviving a disease that is completely similar to the Covid-19 Post-Acute symptoms so tragically and amply demonstrated in that piece - a disease just as puzzling in onset, symptom pattern, suffering, and lack of answers. I'm talking about ME/CFS, or as it is known in the United States - chronic fatigue syndrome. I have tried to contact 60 Minutes regarding this omission and the plight of many, many others who are readily available to tell their stories and demonstrate their struggles in any Facebook support group just like the Covid-19 Survivor Corps, but they so far, like other media outlets, medical centers, and the like, choose to ignore us. It is about time that, that changes.

Before I go on further and lest you tune me out immediately, I want to strongly emphasize here that this is not a fake disease nor is it a rare disease. The World Health Organization has recognized myalgic encephalomyelitis as a neurological condition since 1969. The Centers for Disease Control finally recognized it in the US in 2015, after the Academies of Medicine made a sweeping statement declaring it a serious biological disease that cries out for awareness and understanding, and releasing a 304 page book titled Beyond Myalgic Encephalomyelitis/Chronic Fatigue Syndrome, Redefining An Illness. The World Health Organization estimates for the disease population are conservatively listed at 17 to 24 million, with up to 2.5 million of those in the United States. Since that time, slowly intensifying research in the United States has continued to reveal ME/CFS to be a multi-system disease that involves a strongly abnormal immune response whereby the body shuts down, in many cases after some kind of viral or bacterial infection. Sound familiar?

I cannot tell you in this one email how much EVERYTHING that these people who were featured in that 60 Minutes Long Haul segment mimic exactly what myself and millions -- yes **MILLIONS** of diagnosed and undiagnosed people around the world are going through and have gone through on a daily basis - down to the lack of awareness at onset, the stone-faced denials following the wanton destruction of their own physical health, and then the cruel, unmitigated shock of their worlds crumbling under a blazing inferno of pain, rejection, and a never-allaying pattern of symptom crashes. They are living in darkness and wished away in every country of the world. They fill patient groups all over Facebook, just like Survivor Corps. It would take a book to describe the horrible treatment and rejection I’ve gone through. Investigative reporting programs like 60 Minutes should have done stories like Cooper’s a long time ago on this, questioning why people who are buried in such wretched horror are being completely ignored in every single civilized society. Sam Donaldson aired a piece on Primetime Live in 1996, The Golden Girls aired an episode where Bea Arthur’s character on the show was struggling from chronic fatigue syndrome, mimicking the struggles of the show’s actual creator; CNN did an online piece about genome research scientist Ron Davis of Stanford and his quest to free his debilitated son, and that is as close to the mainstream that any coverage has ever gotten. Other inroads have never been made. The 60 Minutes, 20/20s, and the Datelines of the world have refused to show any further journalistic endeavor - or questioning as to why it is the tortured lives of endless numbers of people have gone on summarily dismissed by numerous doctors, governments, and disability systems. Even Dr Fauci suggested during a July 9 press conference that "long-haul" Covid is "highly suggestive" of myalgic encephalomyelitis. Nobody in the press corps batted an eyelash.

I'm not a producer, I'm not a journalist, I'm not an entertainment reporter, I don't even write for tabloids but I can throw you the pitch that would go into the tease of the story - it would go something like this - “Millions of people around the world are crippled by a disease so devastating they can't even get out of bed. Why haven't you heard of it?” It would not be a stretch to find the easy angle to this story especially in light of Post-Acute Covid-19.

I understand all the jargon, about how you get a high volume of mail, “blah blah blah blah blah; therefore, we can't answer everything blah blah blah blah blah” but the same old excuses are no longer cutting it in regard to ME/CFS The amount of evidence that demonstrates this is a real disease that maims, tortures, and even kills and has been going on for decades, likely centuries is so momentous that it is truly scandalous for a program like 60 Minutes or yourself to continue to ignore it. Just ask the research centers at Stanford and Columbia University, who in conjunction with the CDC and NIH are looking into this very disease right now as you are sitting here reading this. Just ask the Workwell Foundation in California that conducts scientifically-proven disability studies on CPET testing that demonstrates the existence of post-exertional malaise. The few physician experts in the ME/CFS Universe released this letter in September, signed by their coalition explaining their belief in the link between Post-Acute Covid-19 and ME/CFS.

Anderson Cooper stated in the opening of that segment “Doctors tell us they have never seen anything like this. While researchers around the world are scrambling to figure out what’s happening. . .” He’s right – it’s been under their noses for decades and they've just chosen not to see it. If ME/CFS had been thoroughly regarded and researched long ago, this would not be such a baffling, tragic mystery. The hidden and disparate voices of the ME/CFS Community back me up on this and amply demonstrate that our struggles, our pain, our rejection, and our voices are real.

Contact me if you want to talk further about this,