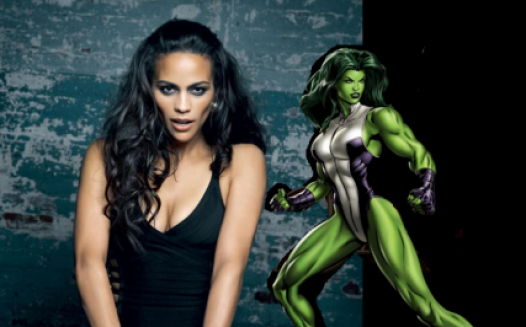 Paula Patton to play She Hulk in the MCU

While Avengers Infinity War and Avengers 4 are yet to arrive in theaters in 2018 and 2019 and with Disney and Marvel now owning 21st Century Fox, Kevin Feige is sure to have the MCU beginning with Phase 4 featuring plenty of new heroes in the franchise and along with The Fantastic Four, Wolverine, Deadpool and the X-Men, one of the new characters that Marvel Studios should include is everyone's favorite green superheroine, She Hulk.

She Hulk, aka Jennifer Walters is the cousin of Bruce Banner aka the Incredible Hulk and whether Hulk survives the next two Avengers films or not, She Hulk is still to be greenlit for the MCU since samples of the Hulk's blood had been extracted and stashed in viles somewhere other than Samuel Stern's lab and as the next strongest hero in green after Hulk, the best actress that should fit the role of Jennifer Walters in the MCU is Paula Patton from MI: Ghost Protocol.

Now if Marvel does do a She Hulk film in the franchise the villains they should have her tackle are the U-Foes.

Now if you really do want Marvel to do a She Hulk movie starring Paula Patton, please contact the following and sign this petition!