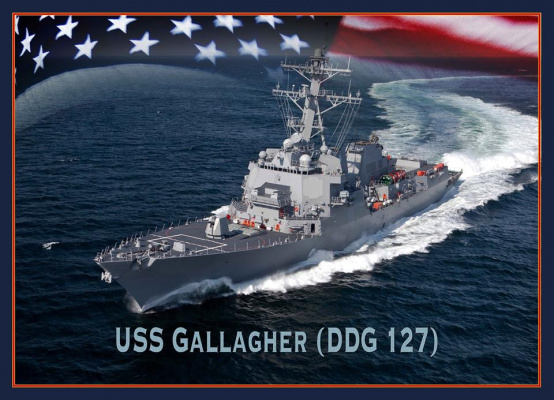 SUCCESS! The USS Gallagher was officially named this morning!

THANK YOU FOR YOUR SUPPORT AND CONTINUED INTEREST!

March 2022 - Keel laying ceremony scheduled - Patrick's family will be on hand to sign the Keel and allow the production to progress with a launch estimated in 18 months +/-!

Nov 2018 - First steel is cut for the ship's construction!

March 18th 2018 at the direction of the United States Secretary of the Navy Spencer, DDG 127 the newest Arleigh-Burke Class Guided Missile Destroyer has been named USS GALLAGHER! Senator Schumer of New York, surrounded by Patrick Gallagher's family & supporters of this petition announced the Secretary's decision this morning March 12th at the USS Intrepid Museum in New York City!

What: We, the undersigned, respectfully request that the Secretary of the Navy direct that a DDG class ship scheduled to be procured in or after 2017, be named in honor of Corporal Patrick "Bob" Gallagher, USMC, Navy Cross, of Ballyhaunis, Co. Mayo, Ireland (KIA ~ Da Nang 1967)

This request is in keeping with the traditional naming conventions of naming Destroyers (DDG) after U.S. Navy, U.S. Marine Corps, or U.S. Coast Guard heroes, and this would coincide appropriately with the 50th year anniversary of Patrick's death in action.

Please Note:This petition site is hosted and maintained by volunteers. Patrick's direct family are the only contacts for media inquiries, background or additional information. The Patrick Gallagher website http://www.patrickgallagherusmc.info/ will forward any requests, and the family will respond directly as appropriate. We appreciate your support today, and for learning more about Patrick's life.

Who: Lance Corporal Patrick "Bob" Gallagher was awarded the Navy Cross for bravery, having been drafted into the service of his adopted country, he willingly served. While under fire Patrick Gallagher showed his extraordinary heroism and inspiring valor in the face of almost certain death, he saved his comrades from probable injury and possible loss of life. His daring actions were in keeping with the highest traditions of the Marine Corps and the United States Naval Service.

Why Is This Important:

Cpl Patrick Gallagher, an Irishman immigrant on a green-card who lived, worked & attended school in New York prior to being drafted, (including canvassing for Senator Robert Kennedy), chose service over walking away, and offered himself to protect others. He also represents the courage of being one of 3,000 Irish men & women who served in the U.S. Armed Forces in Vietnam, and was one of 29 Irish to have been killed in action there. This recognizes the many contributions of foreign nationals in U.S. Navy, U.S Marines & Armed Forces throughout our history, voluntarily serving with loyalty, honor & commitment to their adopted country.This honor could be recognition for the families of those enlistees of foreign birth who have served our country in support of our countries principles & protection around the world: A US Navy ship afloat with this heritage would be a welcome reminder to those at home that their loved one's service and perhaps ultimate sacrifice, were remembered by us, the citizens, members of our Armed Forces and the government of the United States of America. We herewith request our representatives support, in the appropriate committees of Defense oversight in both the House and Senate, in raising this request at every opportunity with the Secretary of the Navy.

Marius Donnelly ~ A publican who learned of Patrick's story from a visitor from Ballyhaunis, Co. Mayo, and who believes Patrick's courage and life would be celebrated by all of us who value the contributions and achievements of immigrants who came before us, helping to make this the country it is today.