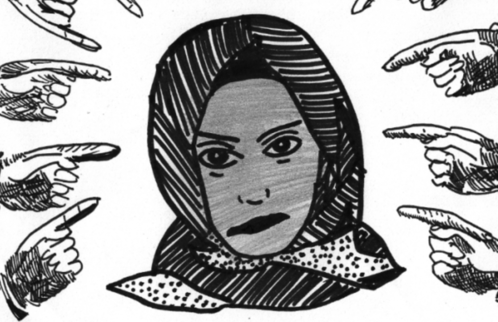 Facts About the Current Anti-Islamic Sentiment in the United States

What YOU can do:

Email your district's representative or state's senator! We've created a template for you!

I write to you in strong support of the Safe School Improvement Act, a revision to the Elementary and Secondary Education Act (ESEA) that would require schools receiving ESEA funds to adopt codes of conducts that prohibit bullying and harassment on the basis of race, color, national origin, sex, disability, sexual orientation, gender identity, and religion. With 42 cosponsors in the Senate I urge you to allow this bill a vote in the (SENATE/HOUSE)

We have witnessed and heard stories about many minority students in our school being discriminated against. In particular, an islamic student was confronted by a substitute teacher about being affiliated with ISIS. In a similar case, another islamic student was prohibited from participating in a school basketball game due to her hijab, a religious headpiece, not matching her school uniform. When the islamic student voiced out her opinion regarding this discrimination, the school administration sided with the original ruling and no action was taken.

As an advocate against discrimination, harassment, and islamophobia, I, and organizations such as Counsel on American-Islamic Relations (CAIR) and Tolerance, urge you to bring this bill to the (HOUSE/SENATE) floor for a vote.

How to find your local representative in Congress:

Again, the Safe Schools Improvement Act was reintroduced in 2015 by Bob Casey (D-PA) and Mark Kirk (R-IL) in the Senate, and Linda Sanchez (D-CA) in the House of Representatives. It is unclear when the SSIA will become law, but reaching out to your local representatives through email or calls will allow them to hear your voice! The representatives you've elected will advocate the bill that their constituents are supportive of.

First, start off by visiting the GLSEN website. http://cqrcengage.com/glsen/?4

Simply enter your zip code and you will see who represents your voice in your federal, state, and territory government.

Once you have found a list of your representatives, visit their website and select "Contact." This will usually allow you to leave a message after filling out your information such as address, email, and the topic of your message.