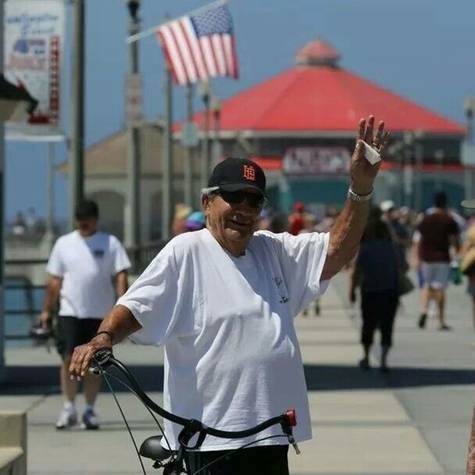 Everyone can sign and we welcome all signatures. This petition is for Huntington Beach residents to get a park named after Frank Ciarelli. Below is a description of Frank and his life in Huntington. Please add your zip code in the comment section once you sign

Born at home in a farmhouse by the Santa Ana River, his mother was Catherine Noles Ciarelli. She was 1/2 Cahuilla Indian - The Cahuilla are a California tribe. She had been born in Portrero Canyon in the San Gorgonio Pass. Frank's father was Francesco Ciarelli. Francesco was an Italian immigrant from San Pio Fontecchio, Abruzzo, Italy.

Frank was the youngest of 8 children. His brother was Gerald Ciarelli; his sisters were Lena, Madeline, Lorraine, LorNel, Lillian and Naomi.

His family called him "Frankie". To his numerous nieces and nephews he was Uncle Frankie.

Bud Higgins gave him his 1st job. Frank became a Huntington Beach Lifeguard at the age of 14. He worked for the City of Huntington Beach for 50 years, and retired as a city inspector in 1993. On July 28, 1950 he married Sue Smith Ciarelli. They were married for 65 years.

Frank attended Huntington Beach Elementary School. He went to school barefoot ... all the boys did. He played on the 1946 Huntington Beach High School Sunset League Championship Football Team; served in the Army from 1947 - 1949; coached the Orange Lionettes Women's Softball Team to a World Championship in 1965. At the age of 82 he rode his motorcycle from Huntington Beach to Prescott, Arizona and back. He was a tribal member of the Morongo Band of Mission Indians. Frank was also a surfer, body-boarder and body surfer; motorcycle-rider; and pitched fast pitch softball. He loved the ocean. He had a good life. He had fun.

If Frank Ciarelli ever bought you dinner, take someone out to dinner. The next kid you see, if you know him or not, give him $20 ... tell him to have fun. Always pay it forward.