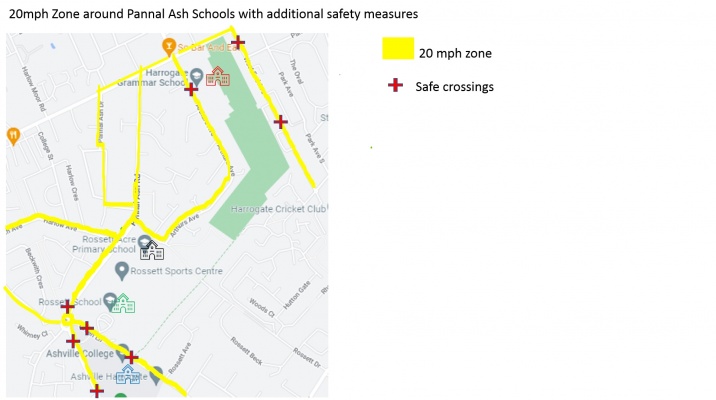 We are asking the council for safer streets in a zone around the four schools in the Pannal Ash area. Please support us by signing this petition. We'd love your ideas too, so please leave a comment or email us on SafePAZforall@gmail.com.

We would like the council to implement a 20mph zone around the four schools, two sports centres and nature reserve. This would include infrastructure such as safe crossing points and signage to support the reduction of speeds as well as chicanes and speed bumps where/if necessary. We would also like improved cycling provisions. We have worked with the four schools and many local people and groups to develop a plan of what is needed for the area. We believe these changes would:

· make the area safe and usable for EVERYBODY,

· keep our area SPECIAL and stop it becoming a cut-through,

It would be refreshing to see the council taking a holistic approach to road safety in the area, rather than the piecemeal improvements currently undertaken. We believe the council has a moral responsibility to improve the safety of our streets in this area, due to its high usage by school children and in light of the fact that so much development has been permitted nearby without adequate provision for the increased traffic.

We would be grateful if you would take a look at our proposals, sign our petition and comment on your own experiences/thoughts about the traffic and current infrastructure in the area. Please feel free to contact us on SafePAZforall@gmail.com if you have any questions or feel you can help in any way. Thank you!

In 2021 over 180 people signed our Petition Enforce 20 mph speed limit on Pannal Ash Road (ipetitions.com). The comments received made it clear that people had serious concerns about their safety, particularly the safety of children, whilst using the whole network of roads around the four schools in the area (Rossett, Rossett Acre, Harrogate Grammar and Ashville). In response to this, we shifted our focus from Pannal Ash Road itself, to the wider area around the schools, the Pannal Ash Zone.

We found that many issues around poor road safety had been raised with the MP and council over the years by the headteachers of the schools as well as by residents. There have been known accidents, injuries and near misses, mostly involving school children and cyclists. The area is used by thousands of children getting to and from school during term time, and at all times, including evenings and weekends, by those using Ashville Sports Centre, Rossett Sports Centre, Rossett Further Education facilities, Busy Bees Nursery and Rossett Nature Reserve. Major areas of concern highlighted on the network of roads around the schools were:

· Speed and volume of traffic.

· Lack of safe crossing places, particularly for children using the streets to get to and from schools at times when traffic is heaviest.

· Area losing its sense of place and increasingly being used as a cut through to and from the town centre.

· Increased housing provision (4000+new houses on the west of Harrogate) generating more traffic and more pedestrians/children needing safe passage to schools, the sports centres and the nature reserve. NO specific provision put in place by the council to mitigate the increased housing and traffic.

· No cycling provision making it dangerous to cycle.

Evidence from elsewhere in the country where 20mph limits have been introduced show that they encourage more considerate driving, leading to safer streets for all road users, including motorists, cyclists and pedestrians. The lower speeds reduce the risk and severity of road collisions. Detailed analysis over 20 years across London found a significant reduction in risk and severity of casualties in the roads that had switched to 20 mph.

Why Create a Zone?

It has been shown in other parts of the country that a 20mph zone is more likely than an isolated 20mph limit to lead to a change of behaviour to more safe and considerate driving practices.

The Royal Society for the Prevention of Accidents states that evidence shows that 20mph zones are an effective way of preventing injuries on the road and that although 20mph limits have generally been positive at reducing traffic speeds, they do not reduce speeds as much as zones. Many studies have demonstrated this. For example, a major review of road casualties in London between 1986 and 2006 was published in the BMJ in 2009. It demonstrated that 20mph zones reduced the number of casualties by over 40% (41.9%). The 20mph zones were slightly more effective in preventing fatal or serious injuries to children, which were reduced by half (50.2%). There was a smaller reduction in casualties among cyclists than any of the other major groups of road users studied, with a reduction of 16.9%.

Why not revert to 30mph and rely on police speed checks?

The council’s speed checks on Pannal Ash Road itself showed that when there was a 30mph speed limit (with the facility for police speed checks), the mean speed of cars on the road was 31.5-38.3 mph. This is mirrored in other areas, with speeds on straight roads in urban areas generally much higher than the actual speed limit, unless there's an overt police presence (which with limited police resources is unlikely to be the case on most days of the year).

Research from Bristol (carried out by University of West England) showed that there was an average 10 second increase to journey times per mile in the central area, where 20mph zones were introduced. In addition, the lower speed limit encouraged drivers to shift to walking or cycling. This shift can help lead to fewer vehicles on the road and a reduction in congestion and therefore journey time. They found that 20 mph will not significantly increase journey times and by easing traffic flow, may actually reduce some journey times.

There has been an expansion of 20mph limits in the UK recently. Several English authorities have implemented 20mph as the default limit for residential streets, including Oxford, Bristol, Warrington, Hackney and Cornwall. Wales has recently introduced this across the whole country. Many parts of Scotland have 20mph as the default in urban areas. The reasons for this rapid expansion are both to improve road safety and to contribute towards healthier environments. The reaction from residents where a 20 mph speed limit is in place has been found to be overwhelmingly in favour. For example, in Bristol studies in 20mph zones, 82% are in favour of 20 mph. These areas have also seen an increase in walking and cycling, a decrease in average road speeds and unaffected bus journey times and reliability.