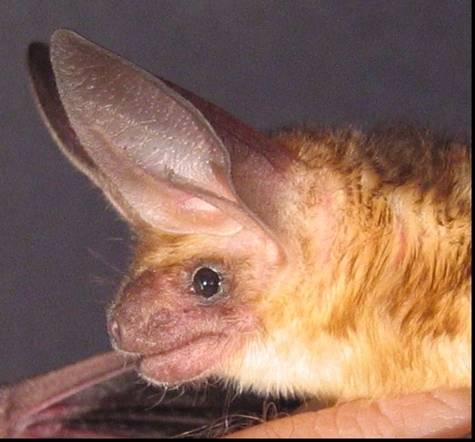 Bats help agriculture in California. Bats provide an estimated 3.7 billion dollars’ worth of pest control management for U.S. Agriculture (Boyes et al. 2011), much of which is located in California. The University of California Farm Advisory has determined that bats eat the codling moth, a serious pest of walnut crops, and University of California (UC) Davis researchers are working with walnut growers to help determine the economic value of the bats’ pest control management for California walnut growers.

Pallid bat ecology. Pallid bats are crevice roosting bats; that is, they spend their daytime in the crevices of rocks, cavities of trees and behind bark, and occasionally in barns, bridges, and other anthropomorphic structures. They roost as individuals, small clusters, or rarely as larger colonies up to about 200. They congregate at night roosts in rock grottos, barns, bridges, and sometimes on porches as they eat, digest their prey, and socialize. Overwintering roosts have relatively cool, stable temperatures and in many areas of northern California are located in protected structures beneath the forest canopy or on the ground, out of direct sunlight. In desert regions of Southern California this species has been observed hibernating alone or in small groups in rock fissures, mines, caves and buildings. Females typically have 1 or 2 young per year and are expected to live for 10 to 15 or more years in the wild. Pallid bats are a social species and exhibit an extensive repertoire of social communication calls, many of which are audible to humans. Pallid bats forage primarily in open grasslands, oak savannah, desert washes, open desert, vineyards, orchards, open pine forests, and on dirt roads such as logging roads. These bats generally use passive listening to detect prey and then they glean their prey from the ground or vegetation surfaces. However, this species also detects aerial prey through echolocating and it captures prey while flying. Their diet composition and foraging style vary within and among different populations.

Naming the pallid bat as the official state bat of California will promote an appreciation of the benefits of bats, more education about their ecological roles, and more conservation for bats in this state.