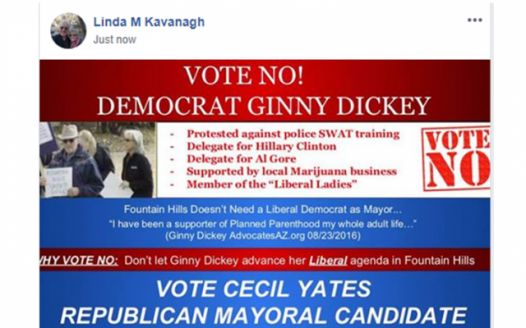 Our Mayor should respect us too!

To the Mayor of Fountain Hills, Linda Kavanagh,

We demand an apology and an immediate halt to your divisive behavior.

When you took office you swore an oath to, "honor and respect the principles and spirit of representative democracy and to set a positive example of good citizenship by scrupulously observing the letter and spirit of laws, rules and regulations."

Our Town Elections are non-partisan and you have intentionally inserted politics into our elections by placing ads and posting numerous public comments identifying the political affiliation of each candidate in order to sway some of the town voters. You have made derogatory remarks toward Democrats and Liberals, including Independent residents of the town. You have also made clear your preference for Republican constituents who make up less than one-half of your constituents, while vilifying the majority of the town's residents.

In these times of stressful division you have let us down and let it be known that you have never represented all of Fountain Hills or its best interests.