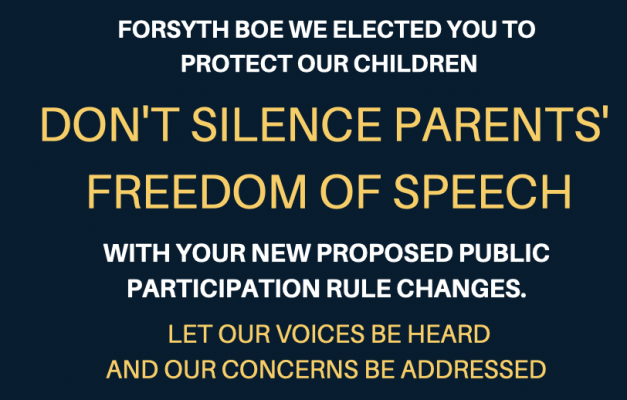 Dear Members of the BOE,

We the undersigned residents of Forsyth County formally object to the following proposed public participation rules below. We oppose these items due largely to the vague and subjective nature of the rules that have the potential to be abused and used as a tool to silence residents in their free speech as it pertains to matters in our public schools.

We reject: Paragraph 3, which states, "All comments to the Board in accordance with this policy are to be brief and are intended for the Board to hear from citizens. Where the speaker seeks action of any kind by the Board or the District, the speaker is referred to paragraph 7 below. "

This language is subjective and vague. This has the potential to limit speech and public participation and could deny a resident from going on record for speaking on concerns affecting our public schools.

We reject #7, which states, "The public is urged to follow other resolution processes set forth in Board policy or available at individual schools, where those processes are clearly designed to address the issue to be raised. It should again be noted that public participation is not designed for this purpose."

We oppose because we have major issues happening at our schools at a larger level and not just happening at individual schools. There are issues and concerns that are prevalent coming from TOP LEVELS in our schools without correction and with the BOE at the top of chain, the BOE needs to be aware of the public's concerns on these matters. Examples of concerning issues across all our schools include but are not limited to: issues of CRT, DEI, activism, sexually explicit books, pronouns, furries. Isolating discussions to individual schools does not allow a true comprehensive examination of the concerns parents have about these pervasive issues in FCS. Further, with many of these concerns, addressing them through the school "processes" have failed. A public discussion is merited to address these issues and should not be shut down at BOE meetings in efforts to restrict their discussion to individual schools.

We reject #8, which states, "The use of physically threatening remarks, hateful racial epithets and other comments or conduct by speakers or members of the audience that result in a disruption of the meeting will not be allowed. The Forsyth County Sheriff’s Office may provide law enforcement services."

This is extremely subjective. Once again, this rule and the vague language has the potential to be abused at the whim of a board member. What is the fixed definition of what is hateful or not that may be allowed or not? Who determines what is hateful or not? In order to be able to think and have full discourse on some issues, there is risk of someone being offended and all a board member has to do is say they think it's "hateful" to shut down a difference of opinion on a topic.