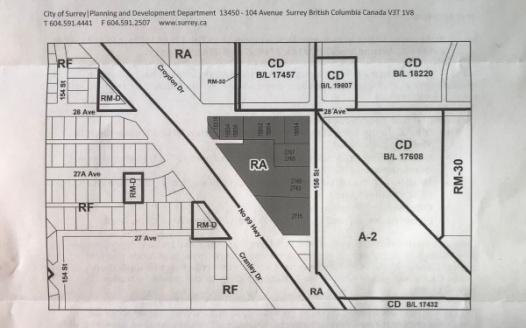 Opposition to Development on 156 and 28th

308 people have signed this petition. Add your name now!

Signatures as of 9am May 19th have be submitted to the City Planner.

This development will cause the following impacts to local owners and residents:

If these two developments are permitted to go ahead as proposed, they will fundamentally alter the character of the family neighbourhood and potentially lower local property values. The proposal of a mixed-use development will turn our residential area into a commercial zone. This is completely out-of-step with this area, especially given the current commercial and retail available along the southern portion of Croydon and lining several kilometres of 24th and 160th.

We recognize that development of the subject properties is expected to take place, but our expectation is that it would proceed in a manner that is consistent with the original OCP, be in keeping with the character of the local neighbourhood, and would be respectful of the already highly constrained local resources, such as school, traffic, and street parking capacities.

Our intent is to galvanize local property owners in opposition to these applications and to present a large and unified response to the City of Surrey. We believe a united front will send a powerful message and place pressure on City Councillors to listen to our collective voice.