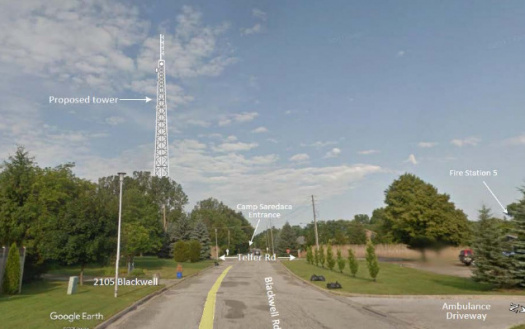 I oppose the proposed construction of the radio-communications tower at at 2065 Blackwell Road on the Camp Saredaca site. Camp Saredaca contains one of the prime remaining Carolinian forests in the area with dozens of species of native trees and plants, making it a unique and special habitat in a rural setting within the city limits worth preserving. This City park is used for a number of city activities including summer and day camps for children and has great potential for future use by the citizens of Sarnia. The tower would be in very close proximity to adjacent residential areas and detract from the country like setting which is so attractive to city residents who chose to live nearby and those who use the Howard Watson Trail and nearby Lake Huron beaches for recreation.

I believe the proposed location of the tower will have a detrimental effect on our locality and result in a loss of amenities and important visual characteristics that should be protected in the public interest.

I respectfully request the City of Sarnia seek an alternate, less community-sensitive location for the tower.