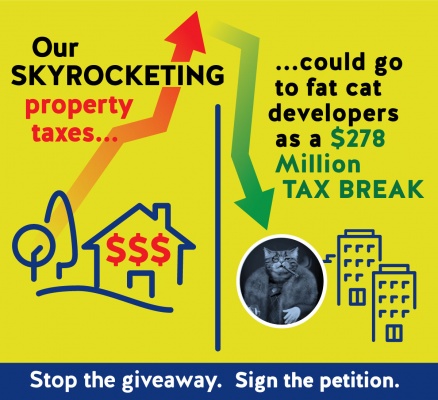 Taxpayers Against Giveaways 0 Comments
2313 signers. Almost there! Add your voice!
78%

Property taxes and the cost-of-living are skyrocketing in Austin. But while you pay more and more, the City Council is planning a $278 Million tax giveaway to the uber-wealthy landowners collaborating with politically-connected real estate groups to develop land on Lady Bird Lake near S. Congress Ave.

The land deal, called the South Central Waterfront Initiative (SCWF), consists of 118 acres of the most valuable land in Austin. This “2nd Downtown,” with an additional 6.2 million square feet of office, upscale retail, and luxury residential towers, is projected to be worth $8.5 Billion when completed. It will be wildly profitable - why would they need or deserve a massive tax break??

Private developers, working with city staff, are lobbying Council vote yes on creating something called a TIRZ (a complex financing tool). The TIRZ then would funnel $278 million of our tax dollars from the City’s general revenue fund to pay for the SCWF’s infrastructure.

This $278 million would no longer be available for pools, public libraries, park maintenance, affordable housing, and other things Austin desperately needs.

The city has not shown, and cannot show, that these massive public tax subsidies are necessary for the private developers to reap the profits of redeveloping this massive, luxury project. THE TIRZ IS A GIVEAWAY FROM US TO THE WEALTHY.

Therefore, we the undersigned call on the Austin City Council to reject the SCWF TIRZ and oppose giving away our hard-earned tax dollars.