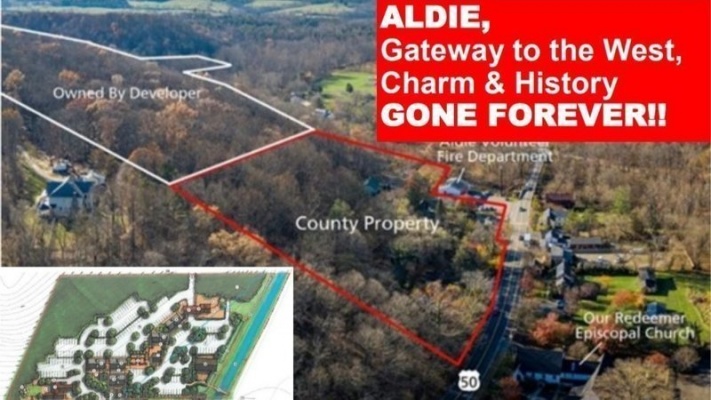 PLEASE NOTE THAT THIS IS NOT A FUNDRAISER. IT IS A PETITION ONLY! WE ARE NOT REQUESTING DONATIONS AND IF IPETITION ASKS FOR A DONATION IT DOES NOT GO TO ANY EFFORT TO PROTECT ALDIE. PLEASE SAY NO THANKS WHEN ASKED TO DONATE!!!

We, the following concerned residents, strongly oppose the “Aldie Agreement” proposed by the Loudoun County Board of Supervisors conveying the “Aldie Assemblage” to the Mojax developers as part of their deal to buy the threatened 16.4 acres in the village of St. Louis.

The county cost in this proposal:

• The “Aldie Assemblage” property (the county has invested over $1.7 Million here)
• $1.5 Million cash
• $600,000 matching grant for improvements to the Aldie property
• An access road from Route 50 to an adjoining Aldie parcel owned by one of the Mojax developers

This complicated new proposal trades excessive residential development in St. Louis for excessive commercial development in Aldie. The proposed new development at the Aldie Assemblage site would include several new structures, totaling almost 35,000 square feet of brewery, retail, and guest room space, parking for 164 vehicles, and a road that will provide access to Route 50 for unspecified uses on the adjacent property.

We oppose the proposal because of the following concerns:

You can read more about the “Aldie Park” facility proposal here: https://lfportal.loudoun.gov/LFPortalInternet/0/edoc/466702/Item%2003%20Conveyance%20of%20Aldie%20Assemblage.pdf

The full story on the background behind the St. Louis and Aldie situation is here: https://www.pecva.org/resources/publications/piedmont-view/standing-with-st-louis-and-now-aldie/

It is imperative that the community voice their opposition to this proposal through this petition and your support is greatly appreciated.