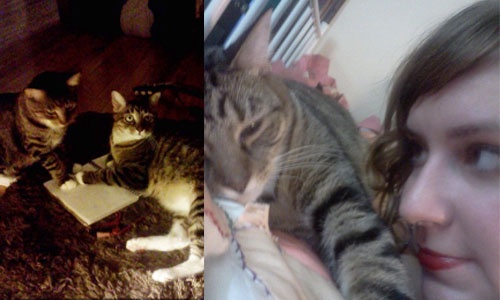 operation save walter the cat

i got my cat, walter, when he was 2 weeks old, in 2009. i had him until he was almost 7. i started going out with franklin doane-arkulary, aka "flip" and we found a place together.

months later, he kicked me out of the house, with nowhere to go. soon after i found a safe place to have walter back, but flip said no, i can't have my cat back, and if i took him to court he would just tell them what an "alcoholic piece of shit" i was. so i filed a lawsuit. before the court date i got a lettter from his lawyer saying he would buy me any other cat/spay/neuter them/food, etc.(there goes his reasoning of me not being able to take care of my cat, obviously. also that is so messed up!) i WON and he was court ordered to return my cat within a month. instead he told me that walter escaped and ran away, basically leaving me to believe that my cat was dead.

fast forward 5 years later, i find out he's alive and well, and that flip made the whole thing up! i went to his door and he slammed the door in my face and yelled that he didn't have my cat (he does, and the woman who was at his house that day will attest to it.)

i'm going through the courts again, but i need all the help i can get. i have been free from alcohol for over a year and a half now.

i am starting this petition because i need your help. i want to get his attention in a big way. i just want walter back. he is my baby and we were very close. he is mine.