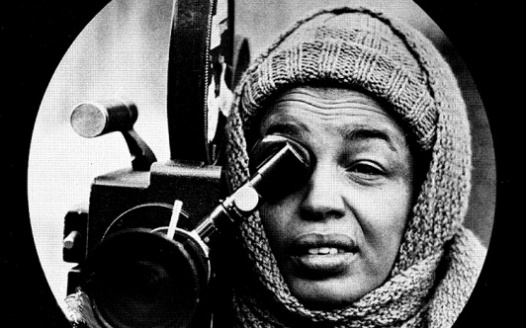 The BFI is to be applauded for organising the summit ‘Woman with a Movie Camera’ as the centrepiece event of this month’s schedule celebrating women in film. It is important to acknowledge that what makes this summit necessary are the oppressive power relations anchored in the sex-based stratification of the film industry, which make it difficult for women to begin and sustain a career in film. Research conducted by the University of Southampton in 2016 found that women are under-represented across all six key production roles, comprising only: 13% of directors, 20% of screenwriters, 27% of producers, 18% of exec-producers, 17% of editors, and 7% of all cinematographers. It is therefore imperative that women not only gain access to the dominant filmmaking institutions, but that they also are front and centre when discussions about our struggles and lack of presence within this male-dominated industry are tabled.

As women who work within the film industry and as those in solidarity with these women, we are writing to ask why you have selected a male as the keynote speaker. We question the suitability of a male who has benefitted from the very structures we are critiquing as a speaker on the subject of women’s agency in relation to filmmaking. What does this say about the power structures that has relegated women on most levels of filmmaking to fill under 27% of the production roles? What kind of cultural work is being performed when a male is speaking on behalf of women filmmakers? Meanwhile, Munroe Berdorf has received more media attention and funding in recent months than almost every woman working in this industry will receive throughout her entire career.

For filmmakers the question of representation is a vastly important one—images are the social and economic world made visible. It is therefore of the utmost importance that women are able to speak for themselves. Representations play an ideological role in the continuing inequalities that form part of the reality of the professional lives of females in cinema. To have as your keynote speaker a male who does not make films could be seen as an insult to all the women filmmakers who struggle on a daily basis to get their films made, often without any institutional or economic resources.

Considering the uphill struggle of women in the film industry who fight the hegemonic structures which consistently exclude them, the principal task of a symposium such as yours should be to identify—through discussion, debate, and critical engagement—the barriers which prevent women from entering into and staying in the film industry. This should involve developing an understanding of how cultural institutions such as the film industry (including the BFI) replicate existing oppressive and exploitative structures. As a male, Munroe Bergdorf cannot possibly understand these issues because he has not experienced them. More to the point, aside from being male, Bergdorf does not even work in the film industry!

We are also concerned that Bergdorf’s role in the conference is tangential to the aim of this event which should focus on women, and not why women should include males in their feminism. This speaker is upstaging the very urgency of women’s voices with another “what about men?” narrative. As much as we support the rights of gender non-conforming males to be heard, this is not the forum for it. In fact, Bergdorf’s presence would only pose an ironic interloping of an event that is ostensibly about women in film.