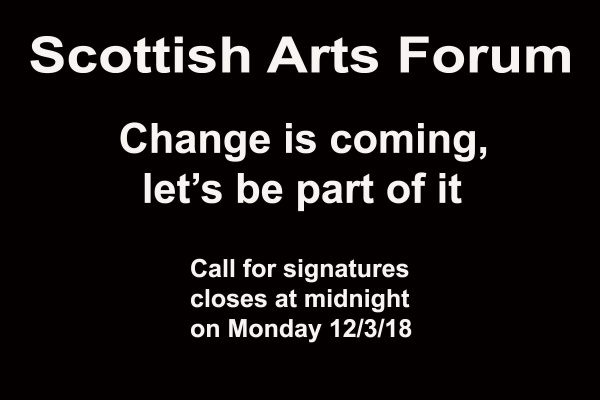 All who wish to sign the following letter, please add your name, arts job description and company (if appropriate)

This letter is written in response to the recent announcements regarding Creative Scotland’s support for Regularly Funded Organisations.

These have sparked a significant nation-wide discussion amongst a diverse group of people from across all art forms on the nature of support given by Creative Scotland to the arts. The signatories below are a sample of those involved to date.

We are all aware of how difficult it is to make decisions around how the money that the Scottish Government gives to Creative Scotland is apportioned, relative to the various demands being placed upon it, and we do not envy the task of those who make the decisions.

However, we are deeply perturbed both by the way in which the RFO decisions have been made – and reversed – and by the values that these reflect in terms of Creative Scotland’s support of the arts in these straitened times.

The lack of clarity in decision-making, inconsistencies across all art forms in the rationales given for support or denial of support, and the poor level of communication - particularly with unsuccessful applicants - has resulted in deep misgivings amongst us around Creative Scotland’s role and strategic direction in supporting the arts within our country.

A depth of feeling and sense of urgency has provoked the clear belief amongst us that, in order to create a strong and sustainable creative sector, artists must be involved at a political level in the development of arts funding strategies.

Our aim is to ensure that the voices of all of those who are subjected to funding decisions by Creative Scotland are included in the discussions with government, rather than simply at the arms-length level of communication with Creative Scotland itself.

An artist-led National Arts Forum is in the process of being formed, with the aim of gathering, reporting and representing the voices of those working in the arts across Scotland. We are sure that you will agree that this is a very important initiative, and it will inevitably take time.

We respectfully ask that any decisions or discussion by the Culture Committee of the Scottish Parliament is delayed until the Forum has met and decided upon its first representations to government. We anticipate that this will be within 12 weeks from the date of this letter.

With all best wishes,