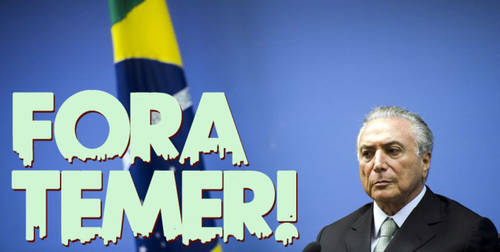 Michel Temer has recently taken over as interim president of Brazil after an impeachment process against president-elect Dilma Rousseff that has been denounced by the international press and institutions as illegal and equivalent to a coup. We, the undersigned academics, scholars, intellectuals, students, and workers from the educational and organizing sector do not support this change in government and do not recognize Michel Temer as president of Brazil. Here is our reasoning:

Since the presidential elections of 2014, which led to the re-election of Dilma Rousseff by a narrow margin, though not too different from the 2010 elections, the right-wing opposition has engaged in agitation through the national media and other outlets to propose Rousseff’s impeachment. The failure of Rousseff to keep her political allies in good terms, related to the difficulties of her strategy of governability, gradually led to a transition of the political parties in her base to the right-wing opposition. Eduardo Cunha, now removed from the presidency of the Chamber of Deputies and who belongs to the PMDB, the same party as Michel Temer, initiated a series of attacks on Rousseff through his political position to the point of accepting an illegally and fraudulent request for her impeachment in Congress. This request set off the process that has now taken Rousseff from her presidential post for up to 180 days and installed vice-president Temer and his own allies in power.

Temer’s political proposals for Brazil are outlined in the Bridge to the Future PMDB programme, and they actually represent an attack on social, minority, working class, and identity rights. His first actions as interim president consisted of eliminating the Ministry of Culture and the Corregedoria Geral da União, which is the autonomous body that was responsible for investigating the actions of the presidential office, especially regarding corruption. He also eliminated the ministry responsible for minority and human rights, and refused to appoint any women or people of colour as ministers. Instead, he placed a man known as “soy king” and who is personally responsible for rainforest deforestation as the Minister of Agriculture, appointed an enemy of affirmative action to the Ministry of Education, and gave the Ministry of Social Development to a man who opposes the Bolsa Família, one of the most acclaimed conditional cash transfer programmes in the world. The cherry on the top, of course, is the fact that seven of his ministers are investigated in the Lava Jato operation, the same one used to fuel middle-class rage against Rousseff, who is not herself a suspect in it. In the meantime, Temer has been recently on trial in the elections court and is deemed unelectable for 8 years. This means that the man who currently occupies the presidential chair in Brazil would not even be able to run for this seat if elections were today!

Brazil’s current economic crisis has indeed led to deep popular dissatisfaction that permeates all classes, but the answer to the crisis proposed by the media and the elites through the persona of Temer and his allies can only help this same elite, which is looking to transfer some of its losses to the working class. In an appalling statement during his first speech as interim president, Temer argued that it was all a matter of perspective, that he was bringing in the policies that would “save” the country, and that everyone should simply “not think about the crisis, and work,” suggesting that the problem for the over ten million unemployed could be reduced to laziness or unwillingness to take any job. This is, unfortunately, not simply discursive, since Temer is a supporter of job outsourcing, the effective reduction of the minimum wage, and the removal of many workers’ rights that were secured through years of struggle. His programme even calls for direct participation of the private sector in the public educational and health systems, and important investments such as scholarship initiatives for undergraduate and graduate students in Brazil and abroad have been cut. Meanwhile, the new Minister of Justice is known for encouraging police truculence against students who were occupying their schools to keep them from getting shut down in São Paulo. This man now claims that protests against Temer and the impeachment should be treated as “guerrilla acts.”

Mobilizations in Brazil against the Temer government are still fragmented, which more accurately reflects the difficulties of organizations under widespread depoliticization, but the position of any one concerned with the health of the Brazilian democracy and securing what remains of social rights is clear: Fora Temer! Out with Temer!

We, the undersigned, support this call in the name of democratic freedom and intellectual honesty, and we urge others to sign this open letter to demonstrate that the world is watching what is happening in Brazil and we will stand together with the majority of the Brazilian people, many of whom stand to lose everything if Temer and the PMDB remain in power through this coup.