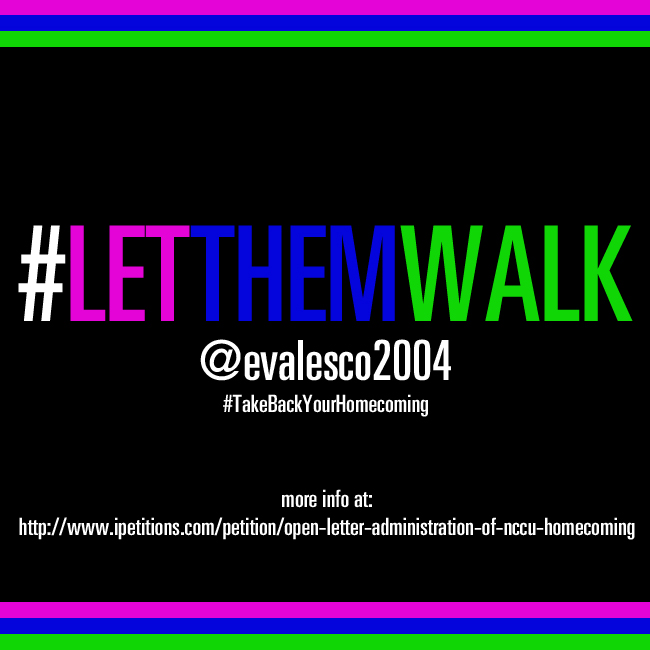 It has come to my attention that there will be no actual NCCU homecoming fashion show headlined by many of the registered student fashion organizations. I have also learned that the fashion/concert show to be hosted on Tuesday, November 4, 2014 will mainly feature out of state performing rappers, with a sprinkling of modelesque expressions. Wednesday, November 5, 2014, (where traditionally Wednesday's are the homecoming fashion show day), will be a free event with a performance from a Go Go band in McDougald Gymnasium.

EVALESCO models, a respected campus organization by faculty and students alike, took the initiative to keep tradition alive and made concerted effort to ensure that the fashion show would go on. In line with current policies and prior to any announcement of a free Go Go band event, EVALESCO obtained permission to host a fashion show on November 5, 2014 in BN Duke Auditorium. This entailed obtaining signatures on required documentation for the following: campus venue reservation, ticket office approval, light & sound company and campus police security contracts. Once approved, EVALESCO proceeded with planning and practicing in collaboration with other campus organizations who are not otherwise represented this year.

This show will be EVALESCO's ten-year anniversary of participating in NCCU's homecoming.

In the aftermath, the president of EVALESCO was met with resistance. He was informed that there could not be two events happening at the same time during a homecoming day. He questioned this policy because nothing was found in any written form. Additionally, the scheduled fashion show was not in any direct conflict with any scheduled homecoming event. When he asked for a document or policy outlining the guidelines, none could be provided.

While time often brings change concerning tradition, the formality of written policy remains. If there is no clear policy stating this, then why is EVALESCO not granted the opportunity to put on their own show on Wednesday November 5, 2014? If there is a policy, why is that yet to be presented? The current President of EVALESCO models has met with the Advisor of the Student Activities, The Vice Chancellor of Student Affairs, and also the Chancellor of North Carolina Central University and not one could supply any form of documentation to support their decision of cancelling the approved show. What are we teaching the future leaders of tomorrow? If they cannot trust administrators and members of university staff to operate and enforce transparent policies and model ethical behavior then what will the legacy be? A simple "because I said so!" mentality is unacceptable.

It disheartens me that a university [my alma mater] that prides itself in student involvement decides to use word of mouth policies to dismiss potential success of an organization in favor of an unwritten agenda. In my undergraduate years, I served as Director of School Spirit in the Student Government Association, Student Ambassador for undergraduate admissions, coordinated and produced multiple successful homecoming events. I have had the honor of supporting over 1,000 students during my tenure as an undergraduate student leader. Furthermore, I had the privilege to assist in the graduation of more than 3,000 students as an associate in the Office of the Registrar.

One of the goals of North Carolina Central University is to have increased support from its alumni through the sharing of expertise to enhance current student educational experiences. When alumni who were very involved and have great school pride hear incidents of this nature, it can, and will discourage active involvement.

I have always advocated for student rights and this issue is no different. Homecoming is about acknowledging the history and traditions that have allowed the University to progress through the ongoing support of its students past and present. Homecoming activities should be planned with student and alumni best interest at heart. Policies should not be formulated in a silo.

Traditionally, NCCU is known for the organizational fashion shows just as much as the coronation or step-show. Most alumni come back to support and reminisce on their days in these organizations. To see that their once beloved organization is still going on is something for which to be proud. To think because an organization wanted to be responsible for their own show and met with resistance is exasperating. As a man who has always loved his college and worked hard to put on great homecoming shows ALL of my undergraduate and post undergraduate years, I am not a proud alumnus at this moment.

At this point, this issue is bigger than EVALESCO not having a show. More importantly, it is about Student Organizational rights and Advocacy.

These talented and hard working students whether modeling, dance, step or choir, need to take back their Homecoming. As an alumnus, I plan to support that fight. This situation needs to be an on-going debate throughout all student leaders and officials. A tangible policy needs to be supplied or created concerning multiple ticketed and/or free Homecoming events.

In a hope to contribute to a resolution, EVALESCO models should be able to proceed with their Homecoming show until there is a formal policy and tangible documentation disseminated to remedy student and alumni concerns. If for some reason this does not occur, unfortunately, I will not be attending any further NCCU Homecomings.