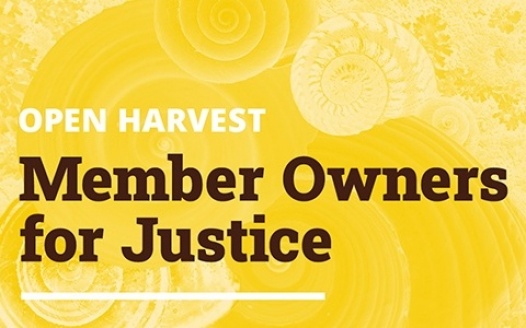 We Are Open Harvest 0

We Are Open Harvest 0 Comments
782 signers. Almost there! Add your voice!
95%

For some Lincolnites, Open Harvest is just a grocery store. For some it is their workplace. For many of us it is a community. A place to greet our friends in the produce aisle & behind the cash register. A place where we and our kids should feel safe & welcomed. Many of us are also Member Owners of the co-op, in whose name we empower the Board & General Manager.

Communities thrive through diversity, openness and mutual aid. Racism, misogyny, hatred, abuse are poisons to a healthy community. We write to inform our community of a dangerous white supremacist, Ross Brockley, who moves among our community with the negligence and complicity of the Open Harvest Board and Management empowering him.

Ross Brockley is a White Supremacist.

For years, Brockley has openly espoused anti-Semitism and his desire for genocide. First-hand accounts of Brockley’s behavior range from Holocaust denial, to approval of racial violence to aggressive misogyny and physical intimidation.

Especially in this time of the Black Lives Matter movement, it is apparent that white supremacy thrives on silence and complicity. In an effort to protect their own reputation, the Open Harvest Board and Management dismissed Member Owner Concerns and used lying and intimidation against its own employees.

Brockley served on the Board of Open Harvest and uses his platform with Open Harvest to do further harm. Board members have admitted to “knowing enough”. The Board Chair initially relayed a story that, at a Board social function, Brockley asserted that the Holocaust did not happen. Later, the Chair attempted to conceal this story and eventually morphed the account into an unnamed former Board member “making statements not consistent with Open Harvest principles”.

Beginning in November of 2019, Member Owners attempted to contact the Open Harvest board to address concern over Ross Brockley. The Board Chair was first contacted through email November 27th 2019. After several more attempts to establish communication, the Chair responded to the initial email on January 16th. The Board Chair met one on one with a Member Owner on February 6th to discuss concerns over Ross Brockley. On March 4th, three Member Owners and an invited guest addressed the Board & General Manager with concerns over Ross Brockley. At this meeting, the Board members were largely silent. Days later, through email, the Board relayed that they would form a ‘task force’ over this issue and asked us to be patient.

For months the task force was silent as these Member Owners sent them several unanswered emails. Finally on May 26th the Board sent an email statement (attached below) to the Member Owners involved in this process, followed by a Zoom meeting on May 28th.

In their email, the Board and GM made clear that they do not view white supremacy & anti-Semitism as an actionable issue and that no action or even a statement would be released on this issue. When asked what Jewish, Muslim, Black, Indigenous and People of Color (BIPOC) should do when forced to share space in the co-op with Brockley, the response from Board Members was: “I don’t know”. After some fruitless discussion, the Board Chair stated that in their opinion, this issue is “done”. Unfortunately, for Jewish, Muslim & BIPOC Member Owners, the issue of white supremacy is ongoing.

When employees learned that the Board had refused to take steps to consider their safety, Management responded by spreading misinformation, followed by harassment and intimidation. Employees who expressed deep concerns for their safety were ignored, disrespected and suffered reprisal. The Board has yet to be honest with Member Owners or Employees or address their safety in a serious way.

All we want is to feel safe in our communities, to be heard, and for Open Harvest to address white supremacy as the serious issue it is. Through inaction and silence, Ross Brockley has been empowered to harm and abuse countless people in our community. The Board & Management of Open Harvest has refused to address this harm, therefore we demand: