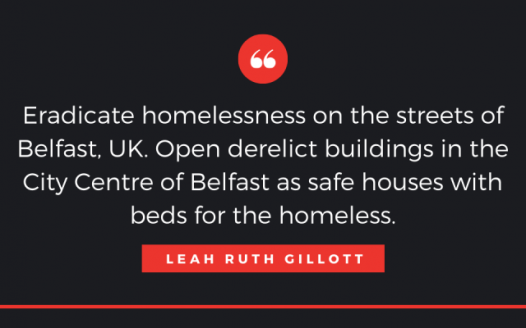 Open derelict buildings in the centre of Belfast, UK, for homeless beds

Please show your support. There are homeless people dying as we speak.

I am petitioning to use the of derelict buildings in the City Centre of Belfast, UK, to be opened by local councils authorities and the government for safe houses for the homeless over the winter period and beyond. These buildings are lying empty and could ultimately house over 100 beds for the homeless, as there is a severe lack of beds and a growing number of homeless people on our streets.

According to the Belfast Telegraph and the Bureau of Investigative Journalism, the figures of death rates due to homelessness are staggering.

The figures include a 101-year-old woman in Belfast and 17 women aged over the age of 80, according to figures from the Bureau of Investigative Journalism.

It's compared to England and Wales, where the latest data from the Office for National Statistics shows that 88% of the estimated 726 homeless people who died in 2018 were men.

Some 205 homeless people in Northern Ireland died in that 18 month period, accounting for more than 25% of the 800 homeless deaths in the UK, figures gathered by the Bureau of Investigative Journalism during the same period show.

Northern Ireland's population of 1.9 million accounts for 2.8% of the UK's total population.

Thank you so much for your love, care and support.