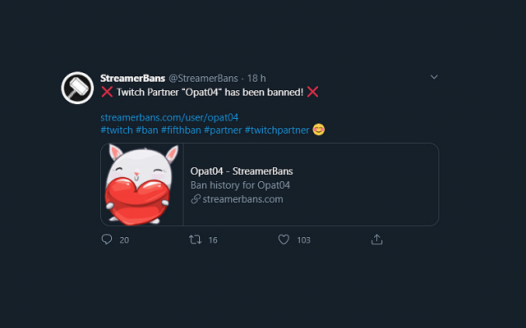 Nice to meet u all! I created this petition due to undeservedly banned streamer Opat04. He doesn't deserve this inappropriate behaviour by a Twitch. Many fans are feeling down because their favourite Czech streamer got banned without any logical reason. After his last ban when he ate pills due to personal reasons he was finally reformed and a well-behaved streamer. Everything seemed great again BUT something horrible happened. He decided to play csgo. One of the many haters sent him an invite to play a game. It doesn't sound weird yet, right? Well, his profile photo was shown for a second and a half. It was an inappropriate photo against terms of use. That's the main reason why Opat04 got banned. This is his undeserved ban. He is totally innocent. Also, he moved to a different city, a new flat and now he doesn't have a chance to stream and make money this way. He changed living because he wanted to make streams better but unlucky Twitch rejected this. Bring him back please, as soon as possible. On that days u were streaming, you changed our days to a better one. We all miss u Opat04 :(