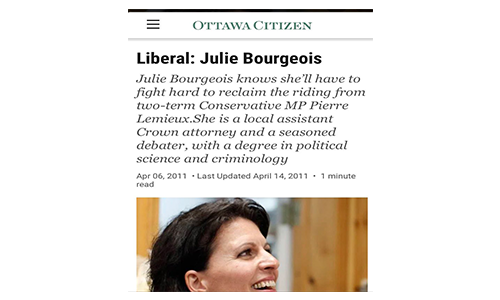 Canada's democracy is based on the judiciary branch being neutral and unbiased. We the people believe it is unreasonable and against the spirit of the law for a judge to politicize a bail hearing. The judge in question is Justice Julie Bourgeois. The accused in this instance has no criminal record, no incidents of violence, and no outstanding charges. While running for a Provincial Liberal parliament seat, the judge has shown her political side. The prosecutor claims that provincial Liberals are somehow separate from federal Liberals, even though we all know that is a huge lie. This same judge referred to protests as an occupation, Ottawa as “our city”, Ottawa police as “our police”, and other personal statements. This same judge also agreed with the Crown that these charges could result in significant jail time. During the BLM protests, huge portions of Toronto, Ottawa, Montreal were all blocked, and countless businesses destroyed, without a single charge laid. The vandalism of many statues of the founding fathers of this nation also occurred this summer. Again, not a single charge was laid. This double standard of hypocrisy must end. In this country, the courts have the highest power. That is why it is vital for all judges to be neutral. It is unacceptable for a judge to go into politics. That is why today, We The People, demand that Ontario Court Justice Julie Bourgeois resign immediately, or be stripped of her BAR license, and then she will be free to pursue her political career as she clearly wishes. We should not have pandering judges making decisions based on their future career prospects.