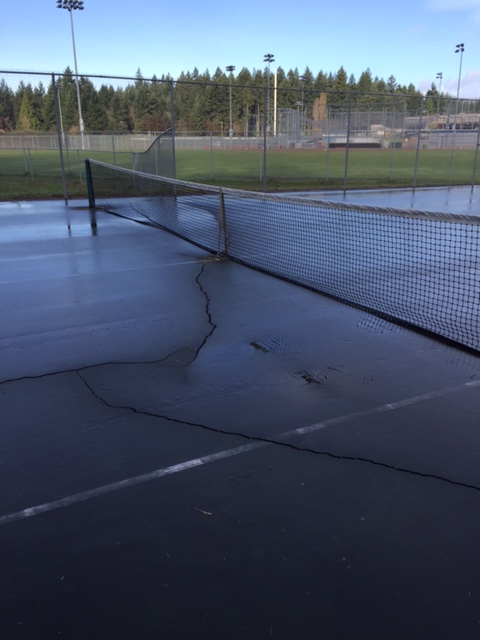 As supporters of Olympic High School's Varsity and Junior Varsity tennis league , we are quite concerned and appalled at the condition of the county's courts on Fairgrounds Road. Since OHS does not have it's own courts, the athletes are relegated to play on county property that has not been well maintained. In fact, the courts have been neglected and should be deemed a safety hazard.
The positioning of the six courts below the hills of the Fairgrounds makes it vulnerable to rain and mud run off. There are severe fissures and grooves on the playing surface. All but one of the courts have deep cracks that run the entire length of the court. There is an accumulation of moss and stagnant water making the surface slippery. The uneven undulating surface further decreases the integrity of the court contributing to the loss of traction. It is not only an aesthetic eyesore, it is also a safety and liability risk. In addition, there are rain outs and practice sessions are aborted during the season causing a loss of valuable training time. Lastly, it impacts school pride as other visiting tennis teams are invited to play on our dilapidated home turf.
We recognize the already existing financial burden the county and the school district constantly endure. The need for prioritization of any allocated county funds or school levies should be carefully considered and equitably distributed. These athletes and their leader Coach Trainer, have proven their commitment to the program despite the odds of frequent rain outs and sub par playing fields. OHS finished 2nd in league for the 2014 tennis season. The answer is not to close a successful program because of it's barriers but rather seek out ways to remove some of these obstacles. Please consider a long term goal of constructing new courts for OHS and at bare minimum, resurface and address the drainage problem of the existing county courts to meet basic safety standards. These considerations should be aligned with the district's values of keeping our students' safe and it demonstrates to the students that hard work really does pay off.