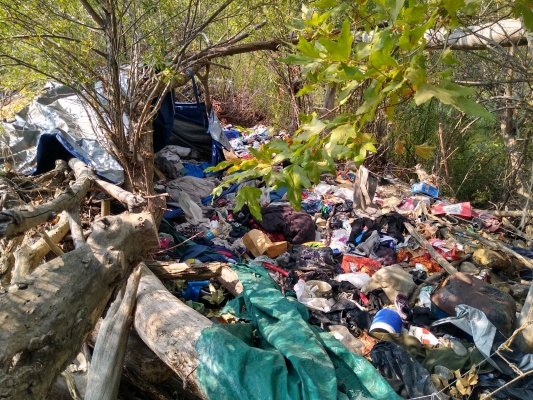 This petition will be forwarded to the City of Fremont, Alameda County Water District, Fish and Game, the Public Utilities Department, the East Bay Regional Park District, the Fremont Housing Division, Alameda County Housing Authority, and the Fremont Police. Contents of the petition are stated below. If you live in Fremont please sign!

We the undersigned request your immediate attention and action on a matter which deeply concerns the members of our community.

We the inhabitants on Old Canyon road were drawn to live in this area because of it’s closeness to the Alameda Creek and quiet rural feel on the outskirts of the city of Fremont. However, in the past two years the Alameda creek area has developed a number of problems addressed below.

Hundreds of trespassers: The creek area receives hundreds of trespassers throughout the summer who leave their garbage and add to noise pollution as well. They line the street with their cars and leave no parking for the locals. They completely ignore “no parking” signs and are not being penalized.

Garbage: The hundreds of people who frequent the creek litter a great deal and the garbage continues to pile up more and more. They also relieve themselves by the creek leaving their feces. This is not only unsightly but also toxic to our water system. The Alameda creek is part of our city’s watershed which will become drinking water, and also flows out to the Bay. So the toxicity caused by the garbage may be affecting the health of not only wild life but the people of the city as well.

Homeless encampment: A homeless encampment has formed up and down the the banks of the Alameda creek. One member of our community was stalked and sexually harassed by one of the homeless, while other members of our community were forced to confront homeless who were loitering in our neighborhood near our homes and cars. The homeless also add to the garbage and feces problem and subject us to daily noise pollution in which they yell profanities at one another. One member of our community even heard an episode of what sounded like domestic abuse and had to call the police.

Fire Hazard: The people who frequent the creek area are known to throw creek-side family barbecues. The homeless who live in the creek area also have fires nightly. Community members report being able to smell nearby fires on a nightly basis. We also sometimes hear gunshots and fireworks coming from near the creek.

Our requests: Given the above stated problems we urgently request that you provide solutions. We want the homeless encampment to be disbanded, the creek area to be thoroughly cleaned, and we would like there to be some form of effective security instated to prevent hundreds of people from illegally entering the creek bed area.

Thank you for your diligence with this matter. You may update us on your progress on this by emailing myrellathompson@gmail.com. Myrella Thompson is the creator of this petition and will be in touch with her neighbors by email, in person and via next-door.com.