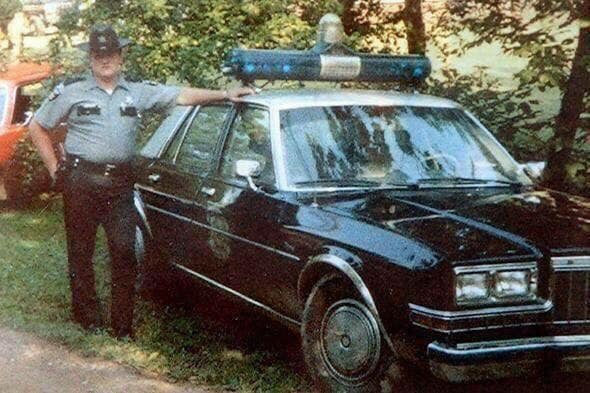 October 2020 Petition for the Denial of Parole for Cop Killer Robert M. Gray

Hello. For those of you who know me, you know this story well. For those that don't know me, let me introduce myself. My name is Sara Janey-Wiseman and I am the niece of a fallen LEO. My uncle Putnam County Sheriff's Deputy John D. Janey was KILOD 08-17-1989. See, there are many stories as to what transpired that night, but one fact remains the same, my uncle was shot 3 times with the last and final shot being at "extremely close range" or "execution-style" at the junction of his left jaw/ear and the bullet exited out his right cheek near his right eye. Let me lay the scene for you.....

On August 17th, 1989, my uncle was on surveillance or a stakeout of a property in Cow Creek located in Hurricane, WV. Nationwide Insurance had been suspicious of a man named Raymond Huck who had previous residences that had "suspiciously" burned down. See, Raymond Huck hired Robert Gray to incinerate his current residence so he could collect the insurance money. Nationwide Insurance had been tipped off about some "suspicious" activity and decided to hire some off-duty (which they are never technically "off-duty" deputies) to watch this residence. It wasn't my uncle's turn that night, but he took that spot for another deputy for whatever reason. He had his normal routine of stopping at my grandparents house in Poca, WV and getting his belly full and even taking some food to-go for the long nights at work. He thought this would be an uneventful night. He was wrong. He kissed his mom on the cheek as she told him to be careful and he simply said "piece of cake mom." That would be the last time she would ever see her youngest son alive again.

John was parked near the residence in his Blazer watching for any suspicious activity, when a car driven by Robert Bates, let out a single passenger, Robert M. Gray. Gray was seen in a pair of sweatpants and a t-shirt and appeared barefoot. He had 2 one-gallon milk jugs of some clear substance, which was later determined to be some type of accelerant. He entered the residence without a problem. My uncle got out of his Blazer and looked into the window to find Robert Gray shaking said accelerant all over the house while running fans to circulate the fumes...he had done this a time or two if you couldn't tell. This is where it gets ugly. My uncle then returned to his Blazer and radioed for backup as well as the fire department saying "if he lights a match, this whole place will go up!" He then returned to the residence and this is where Gray says he got "spooked." Gray then took off through the back of the residence, and my uncle gave chase. My uncle had only one bullet missing from his service revolver....one. That one shot was the typical warning shot. He caught up to Gray and managed to get one handcuff on him before Gray swung around and stunned him with the loose handcuff. A struggle ensued and Gray produced a .357 revolver from his waistband and fired the first two shots. One shot was almost point blank to his chest where the bullet lodged in his back. Another shot was in the side and it transversed his body severing his aorta of his heart. Either one of those shots could've mortally wounded him. Gray didn't stop there. My uncle tried to get him into a bear-hug holding onto Gray for dear life with the hopes that backup would soon arrive. Gray broke free and my uncle's fight was dwindling away at an alarming rate. Gray took it one step further and fired that last and final shot. The "extremely close range" or "execution-style" shot to the left side of his head. He finished him off. He then took my uncle's service revolver as well as his radio so even if by some miracle that he was alive, he had no means to call for help. Gray was later found hunkered down beside the road wearing a blood-soaked shirt and a dangling handcuff. He was apprehended and charged with 1st Degree Murder, yet received Life WITH Mercy. It is still beyond me how that was even possible. My grandmother heard her son die over a scanner. She heard them say they couldn't find Unit 34. She turned off the scanner and went to bed and said "I'll be waiting for the knock at the door." As a parent, I could not imagine the kind of heartache you experience when you lose a child. I wouldn't even want to. My family, my community, and my life was forever changed that night. So I am begging you, please sign this petition. Please share this petition. The man that murdered my uncle is coming up for parole in October 2020 and I do this every single time that he is eligible. Every signature represents a voice stating that he has yet to pay for what he has done. He has not even fulfilled his sentence, and he needs to remain behind bars where he belongs. I promised my grandmother before she passed to keep the man that killed her baby behind bars, and I fully intend to keep my promise along with your help!

Thank you for taking the time to read and sign this!

With all the love from the bottom of our hearts,