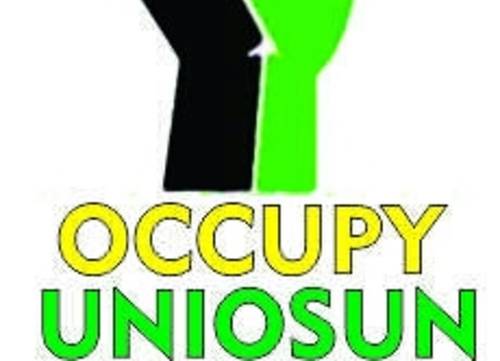 OCCUPY UNIOSUN stands in solidarity with THE SAVE UNIOSUN STUDENTS COALITION to stop the university's decision of " No School Fee, No Examination Policy ".

These common arguments in favor of the policy that is about to be implemented under the leadership of professor Labode Popoola (the university`s vice chancellor) exist for certain reasons because the vice chancellor criticized the university system to be flawed by irregularities; and at the same time, some arguments in favor of some students who are likely to be affected also exist for certain logical reasons. Thus, there are two conflicting schools of thought through which the policy is viewed. It is no news that the administration of professor Labode is an administration which some students have seen to be disastrous and inhumane, because its approach to the implementation of the university`s rules are stringent, autocratic, and filled with harshness. Therefore, the management`s and the government`s points of view can be summarized as follow:

4. The school ought to be generating revenues for the state government through the payment of school fees.

5. In order for the university to achieve its aims and objectives, the payment of school fees is the key.

6. Students have used their school fees for internet banking—MMM,iCharity, NNN—and other irrelevancies

The arguments in favor of the affected students are as follow:

1. NO SCHOOL FEES NO EXAMINATION policy is difficult to implement. The instance of Iree polytechnic which introduced the prohibition of students in writing examination in the year 2016 brought about chaos, disaster, and disobedience to the rules of the school. The instance of Iree polytechnic shows indeed not only that it is difficult to enforce, but that it creates widespread habit of disobedience to the school`s rules

2. The school`s policy, if implemented, would involve a great deal of financial loss, and that in a double sense, its enforcement is costly and inimical, because the affected students will be adversely and vacate the school premises. its societal impact is that it breeds the habits of deviance and ignorance

4. The school`s policy is an unwarranted interference with the right to education. Students cannot be made moral by the university code of conduct. The right to education is stipulated under S. 18(1) of the 1999 constitution to everyone, considering the fact that the university is owned by the government and the government is bind by the constitution, its failure to defend the constitution is also an excuse for student not to pay school fees.

5. The policy has a lot of negative impacts if implemented. It is disastrous and due to this fact, a lot of students will be affected.

6. The school policy is ill-timed because the country is under economic downturn which is ravaging the country.

7. The school policy is a way no oppression, social deprivation and social segregation.

8. The university should reduce the amount of late registration. The amount we the students of this institution are paying is too enormous.

9. There is no student welfare. Due to this, the school has failed its students for the lack of students` welfare as the deaths of some students is a typical example.

10. The university does not have student union government, a body that ought to exist for the protection of students’ rights, and the provision of certain facilities the school cannot provide.

11. The non-payment of school fees has been a custom of the school because it is a burden on students since no student will spend four years or more in the university without collecting a certificate. Thus, the enforcement of the university rule has to be glued with the custom, because no environment can enforce its law or rules without considering the customs and general belief of its people.

13. Not all students spent their fees: some are from struggling homes, some are indigents, some substituted their fees for house rent because shelter is one of the three basic needs of man, and some were affected by the present economic crisis of the country which is the fault of the government because government is an institution that is clothed with the responsibilities of enhancing the welfare of the people.

14. The school handbook is a decree because the students were not consulted during its enactment. Therefore, the implementation of the laws in the handbook will be hard to enforce because it lacks the consent and popular support of the students.

15. The management and government are autocratic bodies because they do not involve students in decision-making. Due to this, autocratic governance of the two bodies is against the principles of democracy and social justice as encoded therein in S.(14)(1) of the 1999 CFRN.

18. If NUC standards are to be strictly followed, the lecturers in some departments are not enough.

19. The grant from ASUU by the government deserves accountability and transparency from the students. The ASUU strike affected students for some months; therefore, they ought to know how the grant was being spent.

20. The grant from ASUU strike is enough to pay the salaries of the school staffs for some months without interference with school internally generated revenue.

Therefore, the school policy is not in favor for all students, the management and the government. The lesson from these two schools of thought is that for the policy to be successful, it requires enforcement for a very long time of at least two sessions and demands incessant vigilance on the part of the management as well as enthusiastic co-operation of the students and the principles of democracy and fairness, particularly in considering the societal impact of the enforcement of the policy.

We call on well meaning people to also lend a voice against this draconic and undemocratic failed management by signing this petition.