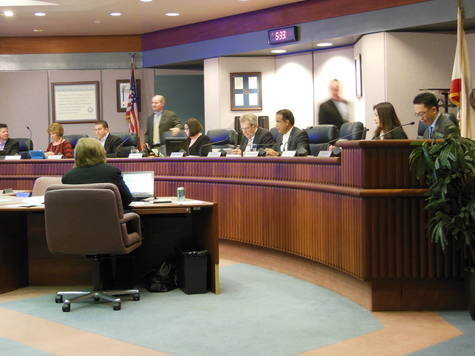 The purpose of this petition is to request that the Orange County Water District Board of Directors provide live Internet broadcasting and video archiving of all of the District's public meetings.

To promote open government and citizen participation in the governing process, all but two cities in Orange County have for years provided "livestreaming" of their public meetings. The South Coast Water District in Dana Point also provides livestreaming of its meetings.

The OCWD manages the Santa Ana River groundwater basin and operates the largest waste-water purification system in the world. It supplies 75 percent of the water used by 2.4 million residents living in 19 cities in north Orange County.

The OCWD is governed by a 10-member board of elected and appointed directors, each representing their own district. Last year, the OCWD board budgeted $1.6 million for “public affairs”, but not a dime for improving citizen access to its public meetings.

In the past, the OCWD board's majority voted against livestreaming on the grounds that it cost too much to provide, considering the limited public interest its meetings.

It's true that public attendance at OCWD meetings is relatively rare. But that's partly because most ratepayers are unaware of the meetings or unable to attend at times scheduled for the convenience of directors, not the public. And having to travel long distances from within the OCWD's outlying boundaries makes attendance even more difficult.

Live video streaming of all of OCWD's open meetings (there are about 10 each month) would increase interest in meetings by providing a convenient means for taxpayers to directly observe their water board in action.

And previous staff reports indicate that professional livestreaming could cost less than $13,000 a year, about the same amount spent on providing meals for the directors at the meetings they run.

Under growing public pressure, the board's majority voted to upload audio recordings of most, but not all, of their public meetings to the OCWD website—on a trial basis. That was an improvement, but no substitute for a live video and audio account of the detailed actions taken at a government meeting.

If the OCWD joins every city in Orange County and the South Coast Water District in Livestreaming its public meetings it will benefit the public by leaping forward into the new age of greater transparency in government provided by modern technology.

This petition was created by John Earl, publisher of the Surf City Voice.

For background articles directly related to this petition, click here.