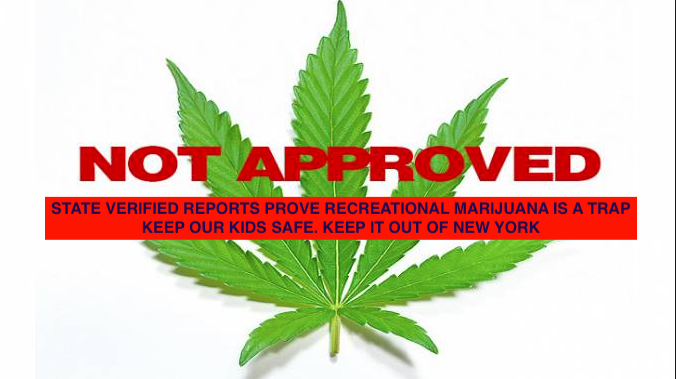 People who make laws that affect how we live in NY are called the New York State Legislature. They are planning to vote, possibly as early as January 2019, on legalizing recreational marijuana use - known as Bill S3040.

Do We Want This?

Do we want this? Politicians and Lobbyists want us to believe marijuana is okay. Suddenly, all the harm is gone. Is that true? We know marijuana has been around a long time. We may even know people who smoke a "joint" sometimes, and to many it seems harmless. Does that mean a state should allow citizens access to a psychoactive drug that negatively effects healthy brain and behavior functions. The Department of Health and Human Services determined that THC, the chemical in marijuana that causes people to get "high", is a psychoactive chemical that causes: hallucinations, slows a person's reaction time, causes your brain to change the way it functions, reduces the ability to learn, lose motivation to want to do things, has a significantly high rate of abuse, and much more.

Colorado was the first state to legalize marijuana use in 2013. After 5 years of allowing Colorado citizens access to marijuana, the Governor of Colorado, John Hickenlooper (D) recently said, he must seriously consider returning to a ban on recreational marijuana, although he admits he "doesn't know how he will get the genie back in the bottle". Basically, the governor is saying they agreed to legalize marijuana, now crime is worse, communities are suffering and he doesn't know how to stop it.

Scary evidence: A 2017 report by Colorado's Rocky Mountain High Intensity Drug Trafficking Area (HIDTA) shows the terrible effects that legalizing recreational marijuana has had on the state. Another report released by SAM - Smart Approach to Marijuana (reviewed by researchers from America's top universities and Boston Childrens Hospital) also states that legal marijuana has devastating effects on communities. The following are facts from the HIDTA report:

In 2015, the Attorney General of Colorado stated, "The criminals are still selling on the black market...We have plenty of Cartel activity, and illegal activity that has not decreased at all." The following year, in 2016, a spokesperson for the Attorney General added, "Legalization [of marijuana] has inadvertently helped fuel the business of Mexican drug cartels. Cartels are now trading heroin...and the trade has opened the door to drug and human trafficking."

Guess what else happened...

Living in a Rotten Apple

Is this what we want for New York, to become the rotten Apple? Seattle is experiencing similar trends after they legalized marijuana. Various Drug Enforcement Agencies report that marijuana is much stronger than it's ever been: In the 1970's it was 2% pure, today it's 70% pure. Unlike alcohol, when a person smokes marijuana indoors or in a car, other people can get "high" from the second hand smoke - especially innocent children. Many of Colorado’s poison control cases noted children and youth consumed marijuana accidentally.

Are we sure we really understand what this would do to our communities? How will our police and teachers be able to handle this? Should we let politicians control and distribute drugs when they can't even reduce the homeless or welfare population? The NYS Comptroller report states:

Many people moved to Colorado thinking they would find a job in the marijuana retail industry, but that wasn't so easy. Even though Colorado made over $1.5 billion from marijuana sales, local newspapers report school districts and taxpayers say they haven't seen a penny. In addition, Colorado taxpayers are paying a high cost for the surge in their state's homeless population, most of the new homeless are ages 18-24.

Smart New Yorkers can see from this evidence that we will not be able to control the unintended consequences of recreational marijuana, no matter how many promises politicians make to "regulate" it. There are plenty of states all around us selling out to the lure of tax revenues...money the taxpayers will never see. NYC is the largest city in America. Can you imagine how the streets of NYC would look if we legalize marijuana? Can you picture this burden in our suburban and rural communities?

What Can We Do?

Gov. Cuomo (D) and Senators Schumer (D) and Gillibrand (D) are pushing legal marijuana in NYS even though they are aware of these reports. The Center for Disease Control also just reported that suicide of youth ages 10 and older is up 34% across all of America. The top two reasons listed are: relationships (think cell phone and social media) and substance misuse. Substance abuse treatment centers claim marijuana abusers make up a top majority of their patients. We still have a long struggle ahead with our opioid crisis!

What can we do? Let's sign this petition and try to show the NYS legislature that we want smart action against recreational marijuana. Various counties in Colorado refuse to participate in legal marijuana activity. Some counties set up their own laws against it. If the state legislators won't stop, get your county legislators to stop it in your county. They need your vote. We have 62 counties in NYS. Stop greedy politicians from destroying New York State.

Sign this petition. Save our state, our counties, our communities, and our children.