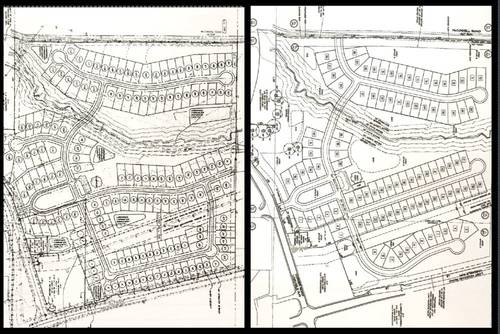 1119 people have signed this petition. Add your name now!

After three hearings and close to five months of initial opposition and later negotiation, the developer Windsong Properties, has produced a greatly revised site plan of Z-75. The attached picture shows the original and then revised plan. A core group of neighbors consisting of representatives from area neighborhoods and those adjacent to the proposed property, have met countless hours. We have met with West Cobb Advocate and P.L.A.N., as well as others who have been instrumental in advising us. We have meet with Commissioner Bob Weatherford and Steve Romeyn of Windsong Properties. We have met together almost weekly as a group of concerned neighbors with no meeting under 3 hours. While we know that there will always be differing opinions, we do see that development is inevitable. Our desire has been to see responsible development in this area. This parcel of land has some irrefutable challenges with high power lines and a gas pumping station. Realistically we do not believe the Future Land Use Plan will maintain the classification of this intersection of Corner Rd. & Lost Mountain Rd. as VLDR.

In our negotiations, the site plan has gone from 146 homes to 97, bringing it to a density of 2.0 (the same as nearby Amberton) We believe that the benefits of this development being an RSL at a 2.0 density are:

We have made sure that there are amenities and greenspace: walking trails, community garden, dog park etc. and elevations that make this development attractive. In our agreement with this plan, we are looking realistically toward the future and believe that these homes will be a quality product that will be an asset to the community. Speaking for the core group of neighbors who have been in regular negotiation, we do not plan to oppose the newly revised site plan and updated stipulations of Z-75 at the 9am December 20th BOC Hearing.

A special thank you to everyone who has shown interest and assisted in keeping West Cobb a wonderful place to live.