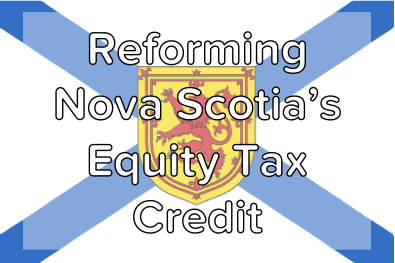 Atlantic Canadians are known for supporting their local communities. And if we’re going to tackle the calls to action of the Ivany Report, it’s now or never when it comes to getting more local businesses off the ground.

As an incentive to investing in locally-grown companies, the Province of Nova Scotia offers a tax credit that allows Nova Scotians to recoup 35 cents for every dollar invested in certain types of young companies.

However, the rules are written in such a way that doesn’t make it easy young information technology companies to take advantage of the tax credit.

There are three big problems with the rules as written:

$50,000 is far too little to get high-potential companies to reach hiring potential, export potential, and exit potential.

Recommendation: An increase in the amount of the tax credit to $250,000 total.

2. They don’t allow investment in the types of shares that young companies sell in their early days

Young companies need to offer shares that balance their own needs and those of their investors, and those eligible for the tax credit don’t align with what’s commonly requested.

Recommendation: To expand the types of eligible shares to include preferred shares and convertible debt.

3. They require the investor to hold the shares for five years

It might sound crazy, but when young companies are purchased, it’s typically well before their fifth birthday.

Recommendation: To reduce the amount of time the shares must be held from five to two years.

Why are these changes a good idea?

+ They’re a win-win for the business and investment communities in Nova Scotia.

+ They potentially reduce the government’s role in supporting businesses that present high-risk, high-reward investment opportunities by facilitating access to capital.

+ Because of the ease of starting an information technology company, they align the incentive to invest with the greatest opportunity to invest.

These are exceedingly minor changes that will make a huge difference to the companies who stand to benefit. We’re looking only to make it easier to invest in each other.

At the end of the day, getting young technology companies off the ground in Nova Scotia is a great thing. They retain smart graduates, provide creative jobs, build products to sell to the world, and allow Nova Scotians—particularly young Nova Scotians—to go after their dreams.