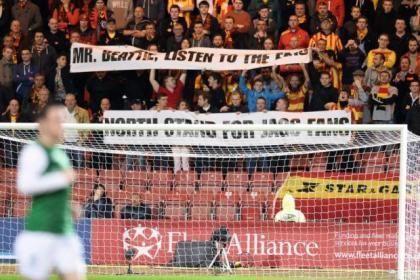 Partick Thistle FC intend to move the home support from the North Stand at Firhill Stadium to accomodate away supporters for all games next season (and presumably all following seasons). This is not due to police advice, nor health and safety or due to any issues caused by PTFC supporters who have been in the North Stand in past two seasons. This is simply a badly thought out idea of David Beattie and rest of the clubs board.
The North Stand has been central to a much improved atmosphere at Firhill in the past two seasons, seasons which have seen our great football club win the (old) First Division, and then compete and at times excel in the SPFL Premiership and ultimately retain our top league status for at least another season. A North Stand that houses the most vocal of the clubs support, a backing that has been consistently and repeatedly acknowledged and praised by the players, management, fellow Jags fans in JHS, as well as journalists and tv/radio pundits, who have all collectively said the North Stand is Partick Thistles 12th Man.
By signing this petition you are letting the Board of Directors of Partick Thistle Football Club know that you do not want home supporters moved out of the North Stand to the main stand, or JHS, so the club can accomodate away supporters of any club this coming season.
Keep the North Stand Red and Yellow.
Follow us on twitter @ptfcnorthstand