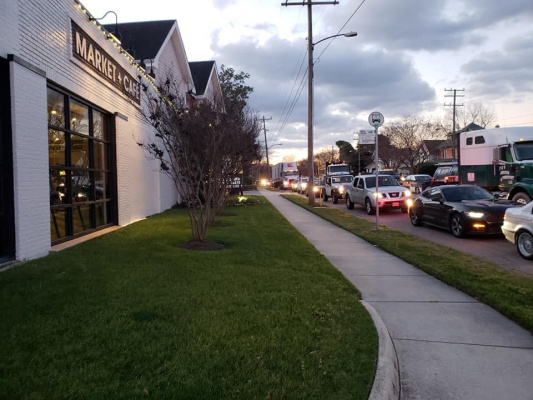 According to the Virginian Pilot, "After a serious accident this spring resurfaced safety concerns for those who live along Hampton Boulevard, one of the city's major thoroughfares may be getting a safety makeover in the coming months.

It may include slimming the road from six lanes near Old Dominion University...

Councilwoman Courtney Doyle ... is leading the advisory committee on the Hampton Boulevard changes, which includes representatives from several civic leagues, the port, the Navy and ODU.

Among the possibilities is making a stretch of Hampton Boulevard north of ODU two lanes in each direction. The aim is to slow traffic near the curve where this spring’s accident happened. It's at the intersection with Bolling Avenue.

The move would add bike lanes to the outside edge of the road and slightly widen the remaining lanes.

On the northbound side, the road would return to three lanes at the foot of the bridge over the Lafayette River. The southbound lanes would narrow around North Shore Road in Meadowbrook, continue across the bridge and widen back to three lanes after Bolling Avenue."

We, the signers of this petition, are residents of the City of Norfolk and we ask that the city not take away any vehicle lanes from Hampton Blvd. Even with the current number of six lanes from ODU to W Little Creek Ave., traffic backups are a regular occurrence especially during morning and afternoon rush hours.

The petition only addresses the lane closures. We ask that the city continue to research safety issues on Hampton Blvd. including speed limits, the removed stoplight at Jamestown Crescent and commercial truck usage.