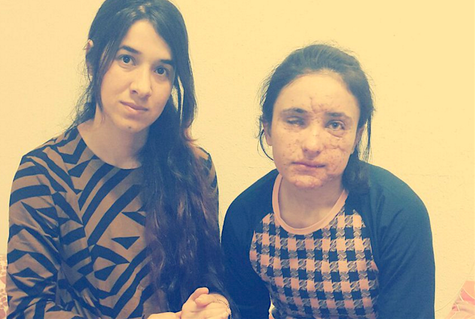 Nadia Murad, a twenty-one-year-old Yazidi woman, and her fellow survivor Lamiya Aji Bashar, a nineteen-year-old Yazidi woman, endured years of unimaginable suffering at the hand of the Islamic State terrorist group. They were both captured as teenagers and were forced to serve as sex slaves, until their remarkable escape efforts finally paid off. Today, instead of living in fear, they have embarked on a journey to educate the world about the current genocide crisis in the Yazidi region of northern Iraq. Nadia and Lamiya work in tandem with the non-profit organization “Yazda” to spread awareness and help to end the sex trafficking and genocide of Yazidi women.

Together, Nadia Murad and Lamiya Aji Bashar have been awarded numerous international human rights prizes in recognition of their dedicated efforts. Nadia Murad currently serves as the first Goodwill Ambassador for the Dignity of Survivors of Human Trafficking of the United Nations, as well as being a nominee for a 2016 Nobel Peace Prize. Lamiya has also established an international reputation for her dedication to both Yazidi rights and education. The two women have collectively been awarded the European Union’s Sakharov Prize for Freedom of Thought, along with many other recognitions.

Given the current American and international political climate, as well as the poignant timing with the recent inauguration of Emory University’s first female president, it is fitting that we consider Nadia and Lamiya for the awarding of honorary degrees. Both women represent college-age students who have endured more than imaginable, but continue to fight. Their work will carry on, not just because of who they are, but because of their constant efforts to educate the world about the Yazidi crisis. It is appropriate for Emory to act upon this nomination to ensure its commitment to international human rights activism, to the moral mission of our renowned university, and to the critical importance of diverse life experiences in achieving a more harmonious society.

Your signature of this petition indicates your support for the nomination of Nadia Murad and Lamiya Aji Bashar for Emory University honorary degrees, which will help further their international impact and allow Emory to renew its commitment to a humanitarian mission.