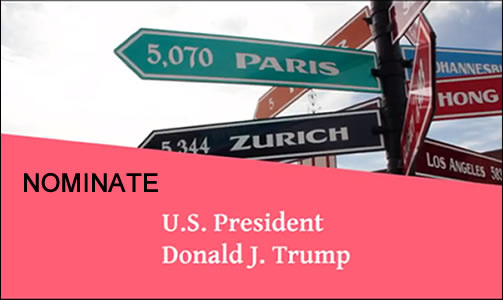 Whereas, Alfred Nobel's last will and testament clearly states that the Peace Prize shall be awarded to the person who in the preceding year "shall have done the most or the best work for 1. fraternity between nations, 2. for the abolition or reduction of standing armies and 3. for the holding and promotion of peace congresses".

Whereas, United States, President Donald J. Trump in this year, 1. negotiated peace between two nations that have been at war with one another for 60+ years*, 2. has eliminated a rogue nuclear threat that for decades has de-stabilized all of Asia and the world ** and 3. brought a new-found sense of peace, security and hope to every nation on Earth. ***

Whereas, these developments are far and away the most internationally significant since the close of 'The Cold War', we are calling upon The Norwegian Nobel Committee, The Congress of the United States, University professors worldwide, and former recipients of the Nobel Peace Prize to affirm, recommend and award the Nobel Peace Prize to Donald J. Trump for his extraordinary achievements towards a safer, more peaceful world.