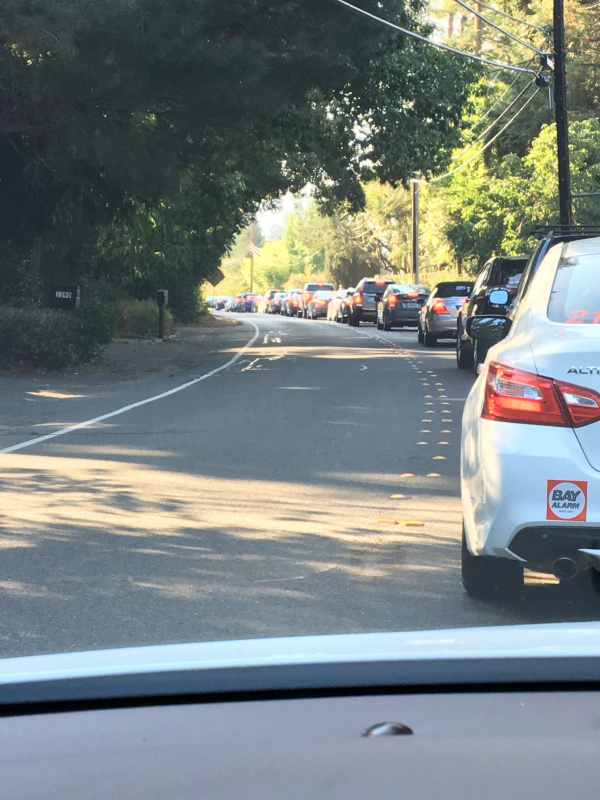 No Turn and No Thru signs to Ease WAZE Traffic on Reliez Valley Rd.

Bumper to bumper traffic and excessive school commutes along residential, winding, narrow, 2-lane collector Reliez Valley Road in Lafayette has become unbearable. Those of us living on the 1300 to 1600 blocks of Reliez Valley Road have cars idling in front of our homes for a few hours Monday - Thursdays mornings (Fridays are somewhat lighter) and we have extreme difficulty getting out of our driveways. We worry about our air quality from the smog exhaust coming from idling cars. We worry about emergency responders being delayed. Those of us living along the 1600 -2000 blocks must endure extremely long commutes to work and school. School buses are picking up children earlier and earlier and arriving to school later and later and tardy on several days. A 3 mile trip to Acalanes High School can easily take 40+ minutes and students are leaving at 7:10 for an 8:00 start time, a distance of 3 miles, in order to try and get ahead of the traffic. Tardies and missed first periods are becoming commonplace. Stressed teenage students are seen driving erratically and passing cars on the wrong side of the road to try and make it to school on time and avoid tardies and missed classes. Out of town commuters and WAZERS are routinely dodging around school buses without regard for our school children and are disrespectful and unapologetic about not allowing residents access out of their driveways and onto Reliez Valley Road. There are no other safe/efficient alternatives for north Lafayette school kids to commute to school.

We know that the WAZE app is sending commuters from outside our area, from places as far away as Antioch and Fairfield, down residential Reliez Valley Road, so as to avoid intended regional thoroughfares such as four lane arterial Taylor Road south and 680 south, making it unbearable for the residents who live in this neighborhood. Out of area commuters are saving 2-3 minutes using Reliez Valley Road versus PH Rd., but this influx causes an increase of 20+ minutes for Reliez Valley Road residents. Reliez Valley Road is not meant or equipped to become a major thoroughfare. This is a residential street, 2 lane collector, for hundreds of homes and students who need to get to their respective schools: Spinghill Elementary, Stanley Middle School and Acalanes High. Acalanes High went to a later bell schedule, 3 days a week, and the problem still persists. Most k18th grade students take the bus to school and those that don't are carpooling.

We would like to propose our own solution to address traffic on our residential street and argue that the following traffic calming efforts for our 2 lane collector street and school route be prioritized, as per regional priority would dictate:

We believe signs erected at these intersections will make a considerable difference to our quality of life and safety and well being of our children.

It should be noted that we are not asking for regular enforcement of these signs. By placing lawful restrictions at these three intersections during school commute hours, WAZE and other traffic apps will be forced to take Reliez Valley Road off their algorithms. This should help considerably. Also, a greater majority of people respect signage, whether enforcement is present of not, in comparison to those that do not.

We ask for Lafayette City advocacy, guidance and support on this matter too since it affects Lafayette/Acalanes District school students and parents and Lafayette constituents.

We ask for for inter-jurisdictional expeditious support on this matter.