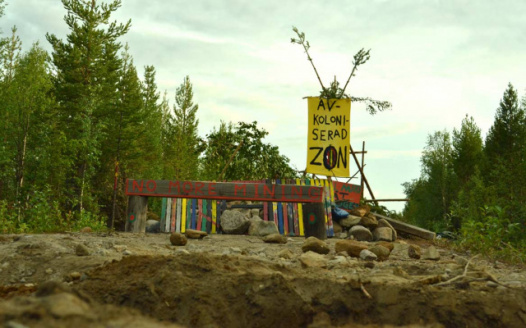 No to the Gallok mine on holy Sami land

In 2006, a British company named Beowulf Mining Plc. and their Swedish affiliate, Jokkmokk Iron Mines AB, were given permission by the Swedish governmental agency Bergsstaten to explore possibilities for mining iron ore in Gállok (also known as Kallak); an area located 40 km northwest of Jokkmokk in the province of Lappland, Sweden.

The area where the mine is to be located is today used by the indigenous Sami people from the villages of Sirges and Jåhkågasska as winter pasture land for reindeers. Reindeer herding is a traditional practice to the Sami people that would be rendered impossible in this area if the mining project is realised.

Continuing protests and demonstrations by the Sami people, as well as EJOs, locals and activists, with the intention to stop the mining project, have taken place, and a series of police interventions to stop the protests have occurred, with several activists being arrested. Scientists have also expressed concern about the dam that is needed as a part of the mining project since if it leaks or breaks it may destroy water supplies as well as power supply in the area.

As of today, the company continues its exploration and the protests continue.