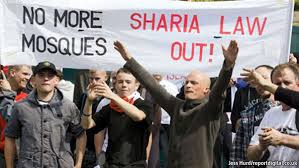 No to Sharia law in Britain and Ireland

'If a kingdom is divided against itself, that kingdom can not stand' -

'If a justice system is divided against itself, justice cannot prevail!'
If you live in Britain abide by British Laws!!
Islamic sharia law represents a serious and growing threat to the safety and equality of women, and indeed children.

In 2008, UK Government formally recognized the first Sharia Law court. There are about 100 Sharia Law courts established across the UK. These Sharia Courts have been issuing rulings against Britain's common law as well as European Union Laws!

In 2011 British Muslims have began demanding that Sharia Law replaces British Common Law and become the only law in towns with large Muslim population in the UK. Streets are being plastered with 'You are entering a Sharia controlled zone: Islamic rules enforced!! Muslim imams are issuing death threats to women who refuse to wear the Muslim veil.

These are just some examples of the Sharia Law.

'Muslims should in engage in Taqiyya and lie to non-Muslims to advance Islam.

A man can marry an infant girl and consummate the marriage when she is 9 years old.

Criticizing or denying Allah, Muhammad or the Quran is punishable by death.

Girls clitoris should be cut.'

A man can beat his wife for insubordination

A woman cannot drive a car as it leads to fitnah

A woman cannot speak alone to man who is not her husband or relative.'

This can happen if Britain does not stand up for British Law and British rights!

Our forefathers fought and died for our country, Britain and Ireland; It's time we stood up for our country and our rights and say NO to Islamic law and the Sharia Law in Britain!!!