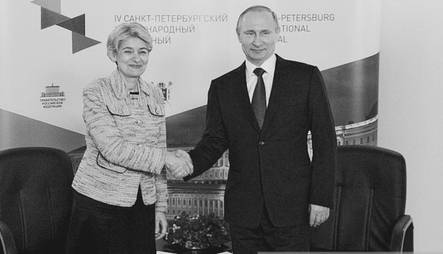 NO to Irina Bokova for UN

The government of Bulgaria nominated Irina Bokova as their official candidate for the UN Secretary-General post - despite the active opposition of most Bulgarian citizens to this nomination. Irina Bokova is supported by profoundly anti-democratic political forces in Bulgaria. Her nomination comes as a result of their threats to bring down the government of Bulgaria. In this we see no consideration for the people of Bulgaria. Irina Bokova's nomination comes as a result of the most disturbing political manipulation Bulgaria has witnessed in recent times. She is a divisive candidate who does not represent all the people of our country. We doubt her personal integrity. We are appalled by her association with the brutal and corrupt Communist system to which she owes her entire career. We believe she will be a security risk to the UN if appointed. We doubt her ability to respect the fundamental principles of the United Nations. We appeal to the members of the Security Council of the United Nations to say firmly NO to her candidacy.