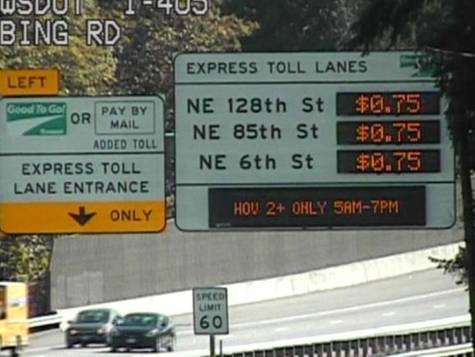 Toll rates for express toll lanes on I-405 between Bellevue and Lynnwood is just a money grab by the state, and that this is just the first step to tolling and changing the HOV requirements for every road. The tolling model is gaining popularity around Washington state as a way to pay for projects and manage congestion.

The tolls are going to be steep, costing drivers between 75 cents and $10 to drive in the new express lanes that will open later this year. The typical toll expected to range from 75 cents to $4.

Most of that money won't pay for new roads. As much as 75 percent of the collected tolls will merely pay for the tolling system itself. It's basically a pricing model aimed at modifying congestion.

This is an unfair tax on the people! I-405 has already been paid for by the people! The government cannot just steal a lane on a public roadway and get away with it!

That roadway belongs to us! And we will speak out about it!