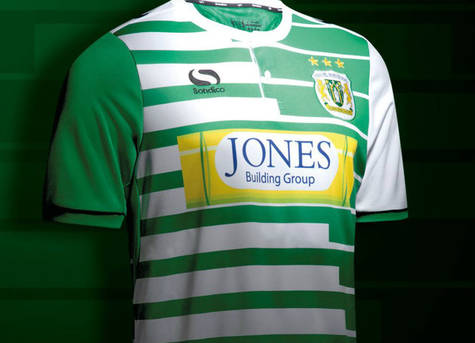 For years, Yeovil Town Football Club plied their trade as one of the most impressive non-league teams, often coming close to League football but falling agonisingly short several times. Over more than a century, they regularly beat league sides in the FA Cup, making a name for themselves as a plucky underdog.

In 2003, a year after winning the FA Trophy at Villa Park, they finally reached the Football League after 108 seasons. Since then, it's been a roller coaster ride for fourteen seasons. Two promotions saw them achieve Championship status, two successive relegations has seen them drop back to League Two. It's a long and illustrious history for a small club!

Recently, the club announced two new kits for home and away in season 2017/18. The home kit was a version of the green and white hoops that has been cleverly tweaked and,released today, the away version is a smart, bold black design that has received critical acclaim from fans young and old alike.

Apart from one thing. Three bloody stars, perched atop the club's badge.

Other clubs have initiated the idea. Huddersfield's kit has three, one for each time they won the First Division title; Nottingham Forest have two for their dual European Cup triumphs and Bury, Ipswich, Notts County and Aston Villa all mark their tiles/cups with a relevant number of stars.

Yeovil's is to mark 15 seasons in the Football League, except they've only been there for 14 seasons!

This petition, should you choose to sign it, will be sent to the club in an attempt to get them to change their mind and remove the stars before the shirts are printed and available. So many supporters have said they don't like the reasoning behind it, time for YTFC to listen to their fans and act in unity.