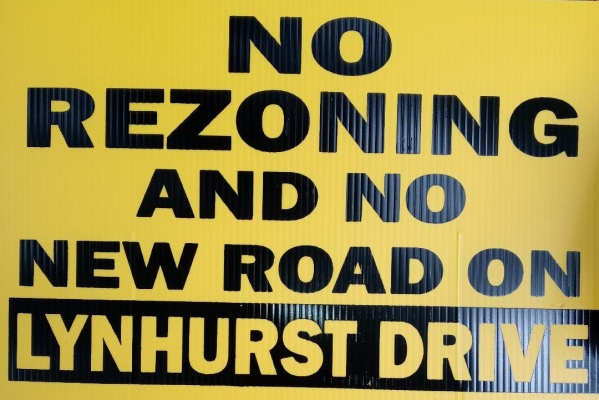 NO REZONING AND NO NEW ROAD ON LYNHURST DRIVE

NO REZONING AND NO NEW ROAD ON LYNHURST DRIVE

(Please, note that no money is requested to sign this petition.)

Many may have heard about a developer's proposal to rezone Lynhurst Drive from residential to mixed use to include commercial use. The developer wishes to bring a 400-700 unit senior living facility in the middle of an established residential community. When asked about a traffic study the developers admitted that they have only done one study, but have not done one on their latest proposal which is to have a road leading from Lynhurst Drive to Cushman Circle (a street that has been known for constant the ringing out of gun shots). They could not even answer resident's questions of how much the units would cost it's renters. Additionally, during one meeting the developer said that his ultimate wish would be to come farther down Lynhurst Drive and develop and that as a property owner he can do as he pleases. Some of the resident's concerns are the possibility of more commercial property being brought to the now residential neighborhood, crime, and degradation of the community's integrity, to name a few.

The community has met several times with the developer and have resoundingly said no to the development. It was said several times that residents who have lived in the neighborhood for some forty and fifty plus years do not ever wish to leave or sell their homes, but plan to live in them for as long as they live. A part of the community's rich heritage was the effort to discourage Black people from becoming residents with the erection of a racial buffer called Atlanta's Berlin Wall. However, Blacks fought back hard and subsequently came to own most of the homes in the community. Some of the community's residents were and are the late civil rights leader Rev. Joseph E. Lowery, former Mayor Shirley Franklin (first Black female mayor of Atlanta), the late Hank Aaron, former City Council President Marvin Arrington and many more. Schools in the community ranked high in test scores and produced some of Atlanta's best, to include politicians, businessmen, doctors, educators, etc.

Please, join with us in our fight and effort to maintain our neighborhood and community's integrity by signing this petition to say 'no' to the rezoning and new road on Lynhurst Drive.