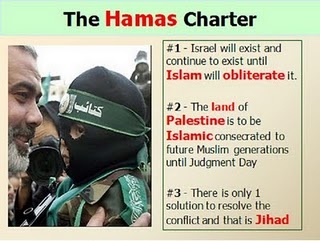 No Negotiation With Hamas Unless They Recognise Israel's Right to Exist

We, the citizens of Israel and those who stand in support of us say, "No more negotiations unless Hamas recognizes Israel's right to exist!"

Hamas calls for the destruction of Israel and has no interest in peace or the rights of the Palestinians, unless it is as pawns in their sickening game.

Unless they are prepared to recognize Israel's right to exist there can be no negotiations with them.

Unless they put down their weapons, there can be no negotiations with them.

The people of Israel will not walk into the sea!! We will not be held hostage every time Hamas chooses to shoot missiles at us. We will not make concessions to an organisation whose sole purpose is to wipe us off the face of the earth.

Bibi Netanyahu, as the elected Prime Minister of Israel, we ask that you refuse any further negotiations unless Hamas recognizes our right to exist and to live in peace!