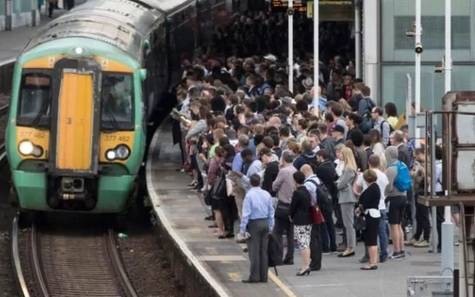 Stop the strikes on Southern Rail

I am a commuter travelling to London daily and I want to petition RMT and ASLEF to stop the strikes and overtime ban.

The Unions have not been telling the whole truth and there is no justification on safety grounds for the joint strike which is seriously affecting ordinary peoples’ ability to work, attend doctor and hospital appointments and get to school or college.

DOO - Driver-Only Operation, sometimes known as Driver-Controlled Operation (DCO), describes a way of operating trains where only the train driver has responsibility for opening and closing the doors and dispatching the train from a station.

ORR – Office of the Rail Regulator

Sign now to end the misery of Southern Commuters

If you want to see the evidence and links to the original sources of information to support these statements read on.

"What they (Southern) are not telling passengers is that the increased risk to passengers of DOO has even been recognised by the RSSB.

“DOO does not create additional undesired events but may increase the likelihood of an event occurring or increase the severity of its consequence."

What the RMT did not report, is that the RSSB also said:

“However, with the right technical and operational mitigations the analysis has considered the provision of DOO(P) to be safety neutral”

In fact, the removal of any possible miscommunication, which could exist between driver and guard could, potentially, deliver some safety benefits. If we had found evidence to suggest that DOO was not safe when done correctly, we would say so.

DOO can be operated safely, provided that as with all forms of train dispatch, suitably maintained equipment, proper procedures and competent, trained staff are in place;

ORR is satisfied that with suitable equipment, procedures and competent staff in place the proposed form of train dispatch intended by GTR-Southern, meets legal requirements and can be operated safely.

Extract from RAIB Investigation into Hayes and Harlingon accident – see below

1.the provision of suitable equipment (eg cameras and CCTV monitors)

3.effective management of risk at stations, particularly where visibility is poor or platforms are crowded.

In other words safety is NOT an issue as long as the right technical and operational methods are adopted.

……..passengers are guaranteed that there will always be a Conductor to protect the safety of the train and passengers and also assist passengers in the event of an incident, accident or emergency.

We will get better services for passengers …….. not by downgrading guards, taking them off trains and leaving drivers to manage trains on their own, something they are not prepared to do, given the risk to passengers.

1 Guarantees that every train currently operated with a conductor will continue to have either a traditional conductor or a second member of staff on-board;

2 Guarantees traditional conductors will retain their current competencies and second members of on-board will be trained to safety-competent standards including track safety training, evacuation, traction and full route knowledge (excluding train dispatch) which will pass to the driver;

I.e. there will be safety trained staff on board to manage the train and assist when something does go wrong, the only difference is that in future, door operation will be controlled by the driver.

RMT Dossier June 2016 – The Safety-Critical Role of the Guard

“Removing them (guards), or downgrading their role, is a lethal gamble with passenger safety.

The only fatality was the third one on this list and was not on a DOO train.

So the RMT statement that DOO operation is a “lethal gamble” is misleading.

The RMT Dossier also provides examples of many occasions where the guard has made a difference in operational accidents. But if Southern Rail honour the commitments outlined in their bulletin of August 2016, safety trained on-board members of staff could provide the same levels of assistance

We are completely opposed to Driver Only Operation and its forms, including Driver Controlled Operation (DCO) and Driver Door Operation(DDO), throughout the network. We firmly believe this method of operation is less safe for passengers and the workforce and our unions will not agree to the extension of DOO or DCO /DDO under any circumstances.

How can ASLEF genuinely seek a compromise and be preaperd to negotiate if they will not agree to DOO or DCO/DDO operation under any circumstances? It may take two to tango but it sounds like ASLEF are not even prepared to go to the ball

The number of passenger journeys on franchised rail services in Great Britain reached 1.654 billion in 2014-15.

30% of trains in the UK are DOO. So, approximately 500 million journeys are on DOO trains. There were 2 accidents involving door operations on DOO Franchised trains during this period (i.e. excluding tube trains).

On this basis the chances of a platform accident on a DOO train are roughly 1:250 million!