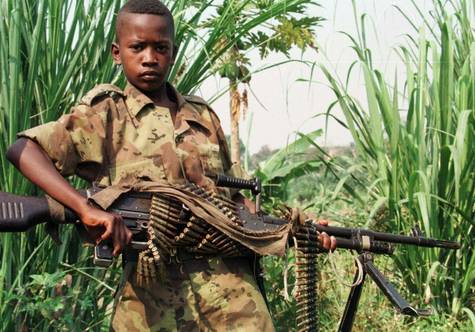 Violence is a state of superiority, people that are performing acts of violence all have a soul purpose, in Mexico Nuevo Laredo, people perform acts of violence for fun, for money and for making statements.

In late 2013, over 2500 children in Mexico were reported missing. These children go through brutal process of being blackmailed and psychologically, physically abused to join drug cartels or Mexican gangs as child soldiers. By December 29th the Mexican military has found and confirmed 1000+ children’s dead bodies scattered all around the streets and countryside, the rest are unknown of their locations but are assumed dead as well.

After these children make it into the gangs, they go through a tough 3-month duration of training camp and eat at ½ the meal of an average child each day. These children are then trained to use guns, hand grenades and knives and must go through a series of tests. Ones including killing other children or using kidnapped individuals for target practice. After the brutal training, these children are thrown into the city to battle other gangs and to bombard the Nuevo Laredo community as well as it’s law enforcers.

Children who unfortunately don’t make it into training camps are forced to be a lab rat. Lab rats on the other hand are a series of test subjects, these lab rats have lethal drugs injected into their skin on for running certain drug tests, this is based on a weekly and even up to daily basis.

Children at a young age exposed to so much brutality also has an enormous long term impact. Since they are exposed to nothing but violence, it occurs to them that violence is the best way to solve problems - even suicidal problems. This is even proven to be significant, after a few survivors were rescued, it never occurred to them to have any form of gratitude, they also use small methods of violence such as spitting and cursing during interrogation - these small acts are a sign of their past and involvement with gang members as well as exposure to inappropriate activities. They also have an addiction to drugs as well as alcohols, often demanding and threatening the interviewers for drug supplements.

Although it may be another blood bath to clash with these gangs, there are ways to prevent and protect children from these acts of brutality.

Governments can support this cause by taking more action upon these gang activities, they can and should enforce and promote free education even for unprivileged families so these children can identify what’s right, what’s wrong, learn to control their emotions and deal with situations under stress – it may be much of a challenge to have our voice be heard, as seen for the occupy central incident in HK, to drive the government, we can keep it simple and use the traditional way by sending emails and phone calls to government legislators. We can, through the use of internet social media, starting an online discussion topic. As citizens can also start campaigns such as exhibitions or marathons that runs around the US as a form of raising awareness to drive other citizens to join, as well as informing government officials and raise awareness in this form of fashion. The worst but yet most useful way (proven by real events) is the form of public speech, protest and occupying areas, this way the nation can know of our purpose through news reports, popularity and raise awareness in this fashion.

Parents can and should support this cause by being more interactive with their children, they should also have more control over them and take more initiative to ask and learn more about who they consider friends and what they do with them as well as putting them through a correct and professional exposure of education – school.

Mexico is known for being an unsafe place. It is crowded with drug cartels and gangs, including the Zetas - one of the worst, the king of killing, the bishop of brutality, they do things up to an unimaginable level. These acts of violence are causing a dreadful decrease in Mexican population as it also affects many of the people in Mexico as they must provide a more secure and protected lives for their children and families – even if they can’t afford it. Make a stand. Preserve children, protect children, prevent child soldiers.