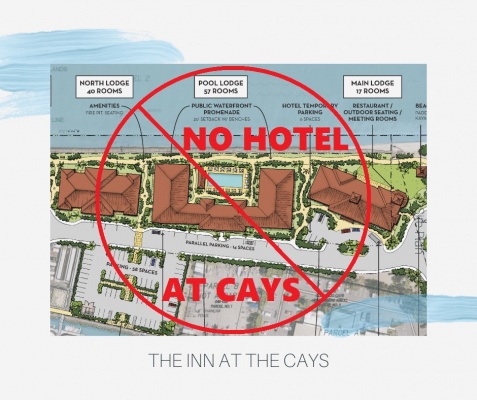 No Hotel At Cays

By signing this petition, I oppose a hotel development on North Grand Caribe Isle at the Cays.

Why We Should All Oppose a Hotel for Coronado Cays:

A real estate developer has publicly proposed a hotel complex for an undeveloped 7-acre property on North Grand Caribe Isle in the Coronado Cays. The project, dubbed “Inn at the Cays,” was announced recently on social media in a slick promotional posting by the developer, who leases the property from the Port of San Diego. The developer pitches an expansive bay-front, multi-story, 114-room hotel, to include meeting rooms, a restaurant, a bar and 141 parking places. He says rooms will be discounted for Cays residents, vets and active military. Hoping that colorful graphics and his mention of discounts will draw you in, the developer asks for public support. And now he has mass-mailed postcards to residents also seeking support. Here are 4 strong reasons to vigorously oppose the developer’s proposal.

First, the Port of San Diego, which must approve any development on Port lands, already rejected the developer’s proposal. The Port’s June 5, 2020 letter to the developer objected to his “entire plan” and labelled “wholly without merit” and “disingenuous” the developer’s claims that the Port had indicated support for the project. The Port then emphasized that a hotel on this property would be out of place as “too intense for the quiet nature of the surrounding areas” (think traffic, parking issues and noise) and in view of 30 years of community opposition to past such proposals.

Second, the proposed hotel, with all its guests and staff, not to mention delivery and service personnel, would over-burden our streets, particularly our already congested main entrance road. Likewise, tourists would fill up the Cays tennis courts and bay beach areas, while all the hotel buildings on Grand Caribe Isle would destroy our panoramic views of the bay.

Third, the developer never mentions that he is not asking the Port for an extension of his lease of the property, which expires in 2034. Does this mean he is trying to get approval for a hotel and then sell the lease? Probably. Would a new buyer have to give discounts to military personnel and residents? Doubtful.

Fourth, this is the fifth large hotel, spa, or time-share development proposed for North Grand Caribe Isle during the last 30 years. All past proposals were defeated because of strong opposition by Cays residents, the Coronado Cays Homeowners Association, and the City of Coronado. This latest proposal is just as objectionable as all the previous ones: a hotel does not fit in our residential neighborhood. We already have a hotel, the Loews, next door to the Cays. We don’t need the traffic, noise, parties, and lights from a hotel in the middle of our community.

Please don’t be fooled into supporting this proposal. Please sign this petition (including your name and email address) and email your objections to the City of Coronado, the Port of San Diego, and the Coronado Cays HOA.