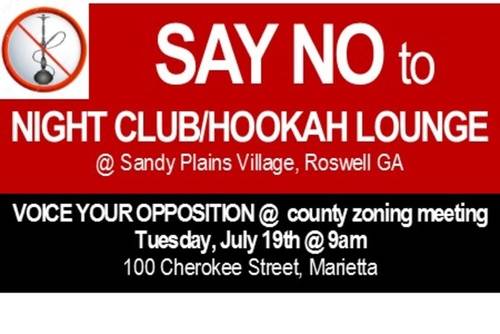 A new business - Kasbah Bar & Bistro – is seeking zoning approval to open in the old Donny's/Pizza Hut location in the Sandy Plains Village shopping center located on Sandy Plains & 92 in Roswell (across from Yeero Village). This area is zoned as NRC (neighborhood residential commercial) and the business is seeking approval to operate as a restaurant/bar. The proposed drawings for this new establishment include a dance floor, VIP lounge, DJ booth and bar areas in addition to seeking late hours of operation of 1am weekdays and 2:30am weekends. In addition to the nightclub atmosphere, the business initially promoted online it was also to offering Hookah (Hookah is a flavored tobacco and is smoked out of a ‘hookah’ water pipe). The proposed plans and late-night hours suggest that this business will ultimately operate at a night-club. Because of this, a group of concerned citizens and neighbors are opposing its opening. While a family-friendly restaurant is welcome in the area, a nightclub IS NOT. The nightclub aspect of this establishment, as well as the proposed late night hours are the MAIN reasons concerned citizens OPPOSE this zoning request and seek support from the community in the form of this petition.

Reasons for opposition include;

JULY 19th : Zoning meeting: 100 Cherokee Street (2nd floor) Marietta GA 30090 @ 9am. We urge as many people to show up as possible who wish to oppose this business. The zoning board will take into consideration the number of people who show up to oppose it!