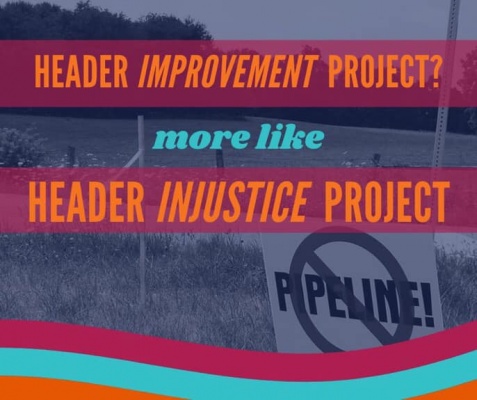 No Compressor Station in Chesapeake, Va

Chesapeake Pipeline Resistance (CPR) is a local Hampton Roads group organized against the build-out of fracked gas projects in our region. CPR aims to educate and protect communities in Hampton Roads who are threatened by the construction and operation of the Atlantic Coast Pipeline (ACP), Southside Connector Distribution Pipeline (SSC) and now the Gidley Compressor Station. Equally important to the sanctity of the air we breathe, the water we drink and life sustaining ecosystems that allow this region to thrive are the communities who are disproportionately burdened with the environmental risks from these fossil fuel buildouts. Environmental Justice (EJ) communities are burdened with air pollution, contaminated water, and rate increases as direct results of these fracked gas fossil fuel buildouts. This is known as environmental racism because EJ communities/neighborhoods are primarily places of people of color. We ask the State Corporate Commission (SCC) to deny the permit for the Header Improvement Project.

The Southside Connector Transmission line runs solely through Black and low-income neighborhoods some of which are historic. Virginia Natural Gas (VNG) states that the line runs through existing infrastructure and we know through the emergence of the Environmental Justice Movement in 1980 that most polluting infrastructure is placed in Black and/or poor neighborhoods. Many residents along the route of the Southside Connector were misinformed about the nature of the project with the thought that either water pipes or home gas lines were being installed. When VNG finally confirmed that it would be a transmission line, not a distribution line, this raised several major safety concerns regarding the SSC. None of the safety concerns of the community have been seriously addressed by VNG; specifically, the close proximity to many schools and places of worship, the high pressure of the line going through a high-density population, the shallow depth of the pipe, the request for additional safety shut off valves in between the start and ending point of the 9 mile pipeline and that pipeline seams leak methane gas into the air, imposing a health and ignition risk.

Compressor stations have a more severe air pollution impact than the pipelines they are connected to because they periodically shoot plumes of nitrous oxide, carbon dioxide and heavy metals into the air in order to prevent explosion. Additionally, compressor stations are usually located in rural areas away from high density populations and emit startling loud noises. For these reasons, it worries us that VNG will not make safety a priority if granted permission to construct the Header Improvement Project including the Gidley Compressor Station in Chesapeake, Va.

Furthermore, the Southside Connector and Atlantic Coast pipelines terminate at the same site as the Gidley Compressor Station. We ask that any environmental assessment of the Gidley Compressor Station include an assessment by the SCC of the correlation between the three projects listed above and the impact on surrounding communities. Noticeably, VNG has not notified the residents near Gidley who would be exposed to the health risks that a compressor station brings. Neither has VNG notified the Chesapeake City Planning Commision of its plan. It is this Commission’s duty to provide a 2232 City Permit for above ground structures (i.e. the compressor station). An EJ assessment is part of the permitting process.

As renewable energy becomes more affordable and a necessary source of energy for a sustainable planet, the construction of new fossil fuel infrastructure [a danger to our overall health and future] is ill-advised at this time. It is time to push our energy companies to transition to cleaner and more sustainable sources of energy.