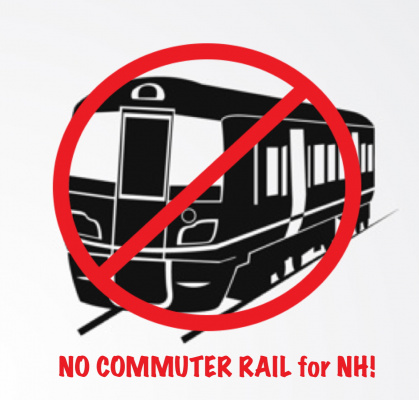 No Commuter Rail for NH

Please let it be known to the NH Legislature, both the House and Senate, and especially The Governor of NH Chris Sununu, that we the undersigned, INDIVIDUALS and BUSINESSES, are HEREBY OPPOSED to the installation of a commuter rail system that would transport people from Massachusetts to NH and back as per described in SB 241.

We ask that our Governor VETO SB 241 and stop this unsupportable proposal.

Commuter rail systems carry with them massive debt that is then placed on the taxpayers in perpetuity. It could even mean and income tax, which the Governor of NH CLAIMS HE IS AGAINST.

Please read more from experts on this subject by searching at our website on "Commuter Rail".
http://bedfordresidents.com/

Remember, college polls recently touted in the news were conducted by highly-paid lobbying firms claiming 75% are for commuter rail. Those polls were likely only the opinions of 500 or so people, NOT "75% of NH", and those surveyed were likely not given any facts. Because ridership would be .01% or less, a commuter rail would not be financially viable. Taxpayers would be stuck with the bill. Who is paying these lobbyists?

A study has already been done that concluded the system would serve 2,568 one way trips per day, which is really 1,284 people taking a round trip per day. Divide that by NH’s 1.386 million population and you get 0.0926 percent. That’s less than one tenth of one percent. (Yes we overestimated when we said 1% would use it)

Read the CATO INSTITUTE'S policy advisory on outmoded technology and see the list of bankrupt commuter rail lines in the USA. http://bedfordresidents.com/bra/2019/05/24/the-com...

SAVE NH FROM WHAT WOULD BE A SERIOUS MISTAKE and let this be our demand that SB 241 be VETOED by the Governor of NH.: https://new-hampshire.secure.force.com/support/GOV...